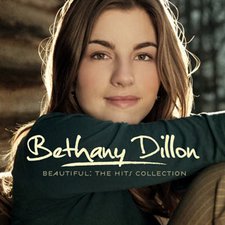 For over seven years, Bethany Dillon has been one of the defining women in Christian music. With five albums and a handful of hits to her name, Bethany is known for her earthy, acoustic sound that is perfect for sunny days. Beautiful: The Hits Collection is the first greatest hits album released for Bethany and it's an interesting mix of music. The album starts out with the title track from her debut album self-titled album. "Beautiful" is a lovely song about honoring and blessing God. One of her biggest hits, it fits nicely here and works well as the title of the collection. "All I Need" comes next. Arguably her biggest hit of all time, this bouncy little ditty is a worshipful song about God's love.

"Lead Me On" is a fantastic rendition of Amy Grant's number-one hit. Bethany's vocals fit the song well and the production has an updated, rock feel to it. "For My Love" is a beautiful song about Bethany's once future husband (she has since married Shane Barnard of the duo Shane & Shane). It's a nice track, although I feel "Great Big Mystery" or "Exodus," also from her debut, would have worked just as well.

After the four tracks from her debut, the album launches right into her sophomore album, Imagination. Imagination was, in my opinion, a very dry album with only a few interesting tracks. "Dreamer" is one of the better tracks from the album; used in the film Dreamer starring Dakota Fanning and Kurt Russell, the song is very reminiscent of "All I Need." "Hallelujah" is a worshipful hit from Imagination that sounds strangely similar to Kelly Clarkson's "Breakaway." "All That I Can Do," the biggest hit and my favorite track from Imagination, is an exciting pop/rock track that resembles Rebecca St. James or Joy Williams. The final representation of Imagination is the track "I Believe In You." This is one of the most boring tracks from the album and feels rather generic. "New" or "Vagabond" would have been a much better choice, but like I said, the pickings from Imagination are thin.

Two of the "rare" tracks follow. This marketing campaign of four "rare" tracks is a little misleading considering you can get all four songs off of iTunes individually. However, "Holy is the Lord" and "Hero" are both fantastic tracks that are definitely worthy enough to be included. Dillon's third album, Waking Up was her absolute best in my opinion and it's sad to see that only two tracks are lifted from it. "Let Your Light Shine" is a stunning piano-led ballad and "When You Love Someone" is a jingly pop/country tune. But where is lead single "The Kingdom?" It's nowhere to be found, which is quite a shame.

Even more distasteful is the shunning of Bethany's fourth album, Stop & Listen. Another solid release, only lead single "Everyone to Know" is included (which is fantastic). Where is "Stop & Listen" or "Get Up and Walk?" These two very strong songs would have made great inclusions. The final track of the album is a cover of "How Great Is Our God", which is a nice addition and a soft closing to the album.

Overall, Beautiful: The Hits Collection could have been much worse, but it is still not a perfect release. Bethany could have easily squeezed three or more songs on the album, preferably from her last two albums and maybe "We Can Work It Out" from 2008's So Far: The Acoustic Sessions, which has no inclusions. This is a probably an album worthy of skipping unless you are just discovering Bethany or are a diehard fan needing to complete your collection.