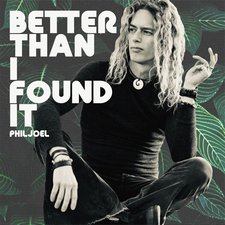 Phil Joel
Better Than I Found It EP


With perhaps Christian musics most recognizable head of hair, longtime veteran of the genre, Phil Joel is back in 2021 via the solo route. After striking out on his own from the Newsboys, then forming worship-centric band Zealand and ultimately returning for the Newsboys United era; its a treat to have him come back to his pop/rock roots. He does so with this six-song EP, titled Better Than I Found It.

While not every song shines as bright, the first three tracks are this reviewer's pick for cream-of-the-crop. Opener and title track Better Than I Found It utilizes a short and sweet runtime of 2:36 and catchy pop sensibilities to set the thesis of the album. Though it sounds like the Beatles, if you listen closely, there is also a fair amount of PFR and Badfinger in the song's approach. In This Together has a Brit-pop piano-based melody, doing a strong impression of Coldplay or Keane while doing enough to stand on its own. The prior song is concerned with legacy, while the latter is a call to unity, a much needed message in our polarized time. Joels native instrument, the bass guitar, takes center stage on Sailing Speed, driving the song forward with electric guitar flurries assisting, and find him ruminating on spending his time wisely.

Fourth track Remember is the strongest musically of the latter half, but left me unsure of the subject of the lyrics that ask the question, why cant you remember your name? Its unclear if the song is about a loved one struggling with suicidal tendencies or perhaps suffering from a condition like Alzheimers. Either way, its the best of the rest and aimed squarely toward encouraging any who have similarly experienced a loved one slipping away, be it metaphorically or literally. While the last two tunes certainly arent of poor quality, they have less that make them stand out for repeat listens and I found myself skipping past them after the first few listens.

All in all, Better Than I Found It is a solid album, and a welcome return from a long-tenured mainstay of the genre. While not every song sticks in the memory bank, the ones that do, really do. This is a must for fans of solo Phil Joel or the Step Up To The Microphone thru the Go era he spent with the Newsboys.

While CCM staple Phil Joel has certainly been busy over the past few years with Zealand and Newsboys United, it has been about a decade since he last graced his listeners with a solo release. Although Better Than I Found It is a short EP, it delivers timely messages of hope and encouragement. The cultural, political, racial, and health-related turmoil of the past year has left many people feeling alone and as though their way of life is being threatened. Joel's relentless positivity addresses these fears and frustrations while also serving as a compass to point Believers towards the true hope that is found in Christ.

Lines such as "Turns out you're not the only one who cares about what's going on 'round here" and "There has got to be a way for us to live in peace down here / can we dismantle our fears and collect each other's tears?" encapsulate many of today's struggles and emotions. While the third and fourth tracks are more somber offerings, the album closes with an air of redemption. Rather than leaving listeners with little more than questions, Joel goes on to offer a perspective of admonishment and hope: "We've been waiting for the day when we can see each other / truly as we are every race, every creed, every color / in this beautiful world / we're alright; let love lead us home tonight."

While primarily a pop/rock offering, Better Than I Found It is a bit of a genre bender. Joel isn't afraid to incorporate elements of reggae, indie, and poptimism. Ultimately, this album is an excellent offering, and current fans of Phil Joel will doubtlessly find much to love over the course of these five tracks. - Review date: 2/16/21, David Craft of Jesusfreakhideout.com