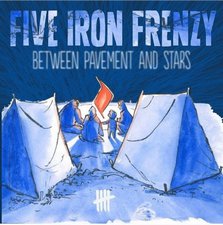 
Reforming a band can be a little tricky, especially when the bandmembers have moved on to other parts of the country with families and jobs and such. This rings true for beloved rock/ska band Five Iron Frenzy, who have sacrificed a lot to get back to the touring game. But even then, they don't play as often as they did in the past, and they've only released one official album in the past four years since they reunited (and one EP of silly songs that was never officially released...it just kind of happened).

Two years after their reunion album, Engine of a Million Plots, Five Iron decided to celebrate Five Iron Frenzy Day (the day they initially called it quits) with an semi-brand new EP. Between Pavement and Stars is six songs deep, and is made up of rarities and songs that didn't quite make the cut for the last album.

An upbeat number called "Boomerang" gets things started, and you can hear the Engine of a Million Plots-ness; it would've fit in extremely well next to songs like "I Am Jack's Smirking Revenge" and "Into Your Veins." The same can be said for the next song, "God Hates Flags," which, to my knowledge, is the only song of the bunch that had been previously released (though only on a CD sampler that was sold at live shows while they lasted). An obvious play on Westboro Baptist's most infamous hateful slogan, the cult is the main focus of the song. A slightly aggressive sound, though not overly so, Reese Roper speaks harshly about the hypocrisy of hating people because of sin when we've all fallen short of God's standards ("There you go bullying again, stealing the spotlight from better men, if God is love, you got it wrong, waving all your placards and flags, the very fact that you're alive says God must also love douchebags").

The closing track on Engine of a Million Plots left the listener with a question and doubt instead of the usual worship-esque song. "Blizzards and Bygones" is reimagined here, and renamed "Blizzards and Bygones (All Frost and No Thaw);" it's also sung by bassist Scott Kerr instead of Roper. This version is stripped down, as a soft piano guides Kerr through the slightly depressing lyrics for the first couple of verses and choruses. It picks up mildly as Kerr sings "Can you stand the weather if winter lasts forever?" and then fades out in a similar manner as the original version. "Into the Storm" brings the rock back into play; it's another song that would've fit great on the last album. It begs the question as to why it was cut in the first place, because it may be the real highlight of this collection. The opposite of that comes next in "To Astoria!" Led by trombonist Dennis Culp, "To Astoria!" sounds like what would happen if Mumford & Sons and Flatfoot 56 wrote a song together. Now, when I say that it's the opposite of the highlight (which I know sounds bad), I don't intend to say that it's a terrible song. It's completely unexpected, for sure, and the sound quality isn't as good as the other songs, but it's a fun Celtic-based folk rock song nonetheless. And it was written for last year's The Second Coming of Cheeses, so the whole thing is forgivable. "Between the Pavement and the Stars" brings us to a close with a bass-heavy, contemplative sound. Roper alludes to how rough life can be on us sometimes, but he takes a moment to remind us all of the most important thing about said life: God is still God (simply stated: "Hallelujah, You're still You").

It's truly great to have Five Iron Frenzy back in action. Of course, the band's fans are all hoping for a new full length album sometime in the near future, but in the meantime, Between Pavement and Stars is a terrific little treat. If you happened to miss it somehow, make sure you remedy that and pick it up at your favorite digital retailer.