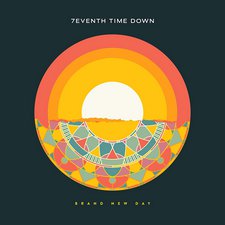 
It has long been claimed that variety is the spice of life. While this ancient proverb was probably written with the notion of new and exciting life experiences in mind, it arguably applies to the music-making arena as well. No need to tell this to the Mount Vernon, Kentucky, group 7eventh Time Down, whose latest album, Brand New Day, touches upon a multitude of differing styles over the course of its ten tracks.

Of course, given the fact that a good bit of current-day Christian pop tends to sound so similar, any such variety on the part of front man Mikey Howard and his fellow bluegrass-bred bandmates ultimately winds up being relative by default. To be sure, it isn't as if the group has kicked off their fourth record with a thrash metal cut, a country song, a Celtic jig, and a classical lute piece, only to finish things off with a half dozen compositions constructed solely from ambient nature sounds.

The potential awesomeness of such a lineup notwithstanding, what they have put together is a solid and engaging assortment of shimmering dance-pop ditties ("I Have Decided"), chant-driven anthems ("Make It Count"), driving power ballads ("Can You"), droning Indian-styled entries (the best-of-album "Basic") and turn-of-the-millennium styled pop numbers that would have made Justin, JC, Chris, Joey and Lance beam with pride back in the day. Even more impressively, they've managed to stitch these seemingly incongruous styles into a cohesive whole that is greater than the sum of its already stirring parts.

Kinks in the armor do crop up now and then. "The 99" is largely generic by-the-numbers fodder. The likewise undistinguished "Trust" offers little in the way of a truly fetching hook or melody line. That said, these minor, and thankfully infrequent, liabilities are more than made up for by assets such as the classic '60s soul flourishes of "Can You," the nimble pop-meets-country guitar textures of "Let Me Tell You," and, most especially, the mesmerizing banshee-like backing vocals that so ably propel the stellar title cut into must-hear territory.

In all fairness, Brand New Day doesn't completely overhaul the rules of contemporary songwriting or threaten to turn the music-making world on its ear. What it does do, however, is ensure that those who recognize and appreciate enthusiastic, skillfully crafted pop/rock will have plenty to chew on and enjoy. And here at a time when so little of what is heard over the airwaves seems to deviate from the now threadbare pop/worship template or leave much in the way of a lasting impression, that alone makes it an effort worthy of both admiration and investigation.