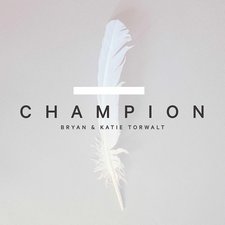 
Bryan & Katie Torwalt are releasing their newest album, Champion, with the Jesus Culture/Kingsway music label. The duo is likely best known for their hit song, "Holy Spirit" -- perhaps made more popular by artists like Kari Jobe and Francesca Battistelli -- from their album Here On Earth. The husband and wife are back for their third release and are hoping to have the same impact as Kingdom Come, which reached 43 on the Billboard Top 200 and 5 on the Billboard Christian chart. The couple say Champion is about victory in Jesus despite the hardships we may face in life.

The album starts with the soft piano and strings-led "Let There Be Light," sung by Katie, which focuses on the power of Jesus's words. The song itself is a pretty good, albeit a somewhat expected, start to the album. Bryan gets his first shot at leading a song on "World of Grace" before heading into the title track. "Champion" probably has the album's biggest focus on the theme of Jesus' victory as Katie sings, "Oh, victory, You have won. Victorious, You have come," in the opening verse and follows with, "Our Champion, You fight for us. You made a way when there was none. Our Champion, You're strong in us. The debt we owed, You paid in blood," in the chorus. It's a nice song and features all of the musical bells and whistles you'd expect in a modern worship song. "Come and Move" is the next song of note. Although the lyrics borrow from the same idea of "Let There Be Light" -- Katie sings, "When You speak, You breathe upon the dust; You come alive in us" in "Let There Be Light," while Bryan mimics, "You breathed Your life in me" in "Come and Move -- Bryan sings a moving acoustic number about a desire for the Holy Spirit to come. This song could easily be a favorite among worship leaders and congregations alike. Moving down the final stretch of the album, nothing really seems to jump out as something that will stick with you for long. In fact, songs like "God With Us" seem to just provide what feels more of a list of God's attributes in the form of repeated "you are's" instead of a truly worshipful experience. While "Emmanuel (God With Us Forever)" is charmingly sung by Katie, it copies the prior song in theme, lyrics, and even title. However, the final track offers a bit of redemption. "Praise Will Be My Song" is a nice sounding tune, featuring piano and acoustic guitar. Bryan sings lead with Katie on background here and the song winds up being one of the album's overall best.

Bryan and Katie Torwalt have crafted a beautiful sounding album in Champion. Unfortunately, there isn't a lot there beyond that. The music is pretty and the vocals are pleasing, but lyrically the album is underwhelming. A couple of tracks stand out in the field of thirteen, but overall, it just feels very repetitive. Some songs borrow lyrics and ideas from each other, while others basically share titles. What had hopes of being a stellar worship album from a duo who has the ability to produce one, ended up being a very run-of-the-mill type outing. Diehard listeners of the worship "genre" will likely find a little more to like with this album. Those desiring more substance and lyrical creativity will probably want to keep looking for another worship album to spend their time with.