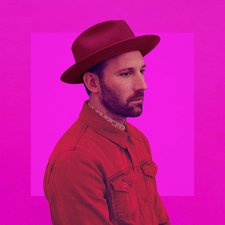 
With his unique blend of pop and hip/hop strewn across his singer/songwriter mould, Mat Kearney has become one of Christian music's most innovative songwriters. Since 2011's Young Love, Kearney has been steadily diversifying his sound, adding elements of R&B and even Reggae to his musical palette. Because of this inventive background, a record like CRAZYTALK may seem like a rather unfortunate step back at first glance. It's not as immediate as Young Love or as musically diverse as Just Kids. On the first impression then, it's easy to be underwhelmed at just how laid-back and uniform it is in its approach. But given some time to simmer, the nuances start revealing themselves. The chill vibes go from unexpected and jarring to welcoming and intimate.

If there is one drawback to CRAZYTALK's sound (as good as it may be) it's that it isn't immediately distinguishable from its secular contemporaries. It takes plenty of cues from tropical house and EDM, but it doesn't utilize the styles in a way that strongly sets itself apart. Opener "Better Than I Used To Be" begins straight off the bat with a softly plucked acoustic guitar and Kearney's warm vocals before the music sinks into an easygoing, hazy EDM drop complete with finger snaps and high-pitched vocals. Unlike Kearney's previous efforts, he doesn't rely strictly upon vocal melodies to create the hooks, so fans wanting another "Billion" or "Hey Mama" may be let down here. Tracks like "Face To Face," "Memorized," and "Fortress" center around their respective drops, whilst their choruses function effectively as buildups. This all may sound somewhat negative, but rest assured that there hasn't been a record this well executed in the genre for some time now. It's incredibly easy to enjoy once expectations and preconceptions are dropped.

But even with the sound change, this is still a Mat Kearney record through and through. "Kings and Queens" is an infectious number that harkens back to the straightforward pop of Just Kids. "Don't Cry For Me" and "Wanted Man" are stripped back highlights that sound like they came from the Young Love sessions despite missing the immediate pop appeal of that record. And although this is the least he's ever utilized his hip/hop approach, "Keep On Loving You" is an excellent, soulful inclusion. Another highlight that can't go without mention is the gorgeous ballad "By Your Side" that finds Kearney at his most vulnerable and romantic. The best track is saved for last, however, with the beautifully atmospheric "I Can't Wait For You To Get Here," which is in the running to be Kearney's best song yet for this reviewer.

On the lyrical side of things, CRAZYTALK is Kearney's least spiritual record to date, which may be an issue for some of his Christian fanbase. The songs are personal and often quirky odes to romantic love and life with plenty of cultural references scattered throughout ("I don't need much with you my love / Cause the Hollywood Hills won't ever make me feel as good as us" from "Kings and Queens" and "Listenin' to Sade playin' on the radio / Sippin' on your latte drawing on your window" from "Memorized," for example). A few notable exceptions include the introspective "Changes" which sees Kearney pondering the reality of growing old and witnessing life's various stages, "Growing up breaks you down / All the leaves have fallen to the ground....everything changes." "Sleeping At The Wheel" challenges the listener to never let life pass by nonchalantly, "Whatchin' these days turn into nights / And lately my hands don't feel like mine / Oh and my eyes keep blurrin' these lines / It's like I've been wasting precious time." The record's weakest moment is the slightly obnoxious "Money," which repeats the same lyrical theme of the preceding track, "Kings and Queens," rending it mostly obsolete.

CRAZYTALK will undoubtedly be a mixed bag for some. A lot of Kearney's signature styles are slightly watered down and there is little spiritual content to be found. But in spite of that, I'd contend that this is Kearney's most realized and accomplished project to date and certainly among 2018's best pop albums.

With an arsenal of great pop songs under his belt, CRAZYTALK is unfortunately an underwhelming release from Mat Kearney. While there are a few decent cuts, this album finds Kearney trying too hard to be trendy, forcing in phrases like "vacay" and "all the feels" over simplistic electronic-based beats. Even when the sound switches up, like the reggae-infused "Don't Cry For Me" or the downtempo "By Your Side," it's more odd than inspired. CRAZYTALK is a serviceable album, but the 44 minute album goes by without leaving a lasting impression. - 5/9/18, Christopher Smith