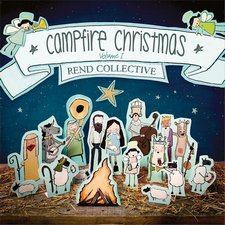 
Touring and writing new music relentlessly is the name of the game for Rend Collective, who has released two studio albums in the last year and a half alone, as well as a Christmas album that originally came out last holiday season. Their take on Christmas carols flew pretty far under the radar last year, so, as we head back into that time of year, it makes sense that we would see a label re-release. Campfire Christmas, Vol. 1 is everything you'd expect in a Rend Collective Christmas album.

One of the things I like about Rend Collective's music is that, not only are they reverent and sincere in their worship, but they also make their songs fun. And that's an aspect they brought with them in Campfire Christmas, Vol. 1. Though the album opens with a quiet rendition of "We Wish You A Merry Christmas" and is followed by the anthemic "Hark! The Herald Angels Sing (Glory in the Highest)," the Collective picks things up quite a bit near the start with "Ding Dong Merrily On High (The Celebration's Starting)." An unfamiliar tune for myself, the song originated in the 1500s, but was given lyrics and a Christmas theme by George Ratcliffe Woodward and was first published about a hundred years ago in his book The Cambridge Carol-Book: Being Fifty-Two Songs For Christmas, Easter, and Other Seasons. It's jolly and festive, and of course the Collective gives it a hint of Celtic flavor. "Joy to the World (You Are My Joy)" bears a strong southern influence, and may even sound like "railroad music" (listen to the refrains of "Joy, joy, joy" and tell me it doesn't sound like a train whistle). Later, they cover an 80s group called Shakin' Stevens in the upbeat "Merry Christmas Everyone." I could definitely be happy without the repetetive spelling of the word "Christmas" throughout the song, but imagery like "Snow is falling all around me, children playing, having fun, for it's the season of love and understanding, merry Christmas everyone" only gets me more excited about the holiday season.

Though there's fun to be had on this album, the Collective actually does spend most of its time singing more reverent songs and Christmas-themed worship songs. Songs like "O Come All Ye Faithful (Let Us Adore Him)," "Shining Light" (penned by a fellow Irish band called Ash), and "O Holy Night (O Night Divine)" are all rather traditional. Some are more up-tempo than others, such as "O Come All Ye Faithful" (which really almost demands a bit of a higher tempo), and they definitely have the Rend Collective touch, but they're faithful renditions nonetheless (Although, "Shining Light" is not a traditional Christmas carol; honestly, I'm not even sure it was originally written about Jesus). One of the more interesting of the collection is the final track, "For All That You Have Done." Set to the classic New Year's Eve song "Auld Lang Syne," which beckons the listener to put the past behind them and start over for the new year, the Collective has repurposed the melody to serve as a song of remembrance of God's great love for us. What once said "Should old acquaintance be forgot, and never brought to mind, should old acquaintance be forgot, and old lang syne, for auld lang syne, my dear, for auld lang syne, we'll take a cup of kindness yet, for auld lang syne" now says "Your grace will never be forgot, Your mercy all my life, will be my source forever song, my story and my light, from mountain top to valley low, through laughter and through tears, surely the goodness of my God will follow all the years." Usually things like that are cheesy, at best, but it actually works very well, and it's a great song of remembrance and celebration for what the Lord has done for us. Remember this one in your times of doubt as well as times of celebration.

Christian record labels love Christmas albums. Their artists take a batch of traditional carols, record their own versions, put them in a Christian bookstore, and money just pours in. But I really appreciate the bands who take the time to make their Christmas album different and special. That's what Rend Collective did with Campfire Christmas. Their versions of the songs are (mostly) different and interesting, and I actually enjoy listening to it over and over. If you're ready for Christmas music already (or if you're reading this in December), and you're wondering if you should buy any new Christmas music, you would do well to get Campfire Christmas, Vol. 1. Even if you aren't into the band's studio albums, you still may find something worthwhile here.