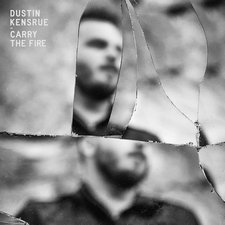 
Singer/songwriter Dustin Kensrue has been releasing solo music since about 2007, but it seems that it had always been overshadowed by Thrice. Of course, the indie rock outfit took a bit of a hiatus in 2012, which led to Kensrue releasing more solo material and other work with The Modern Post. 2013's The Water and the Blood, via BEC/Mars Hill Music, was a runaway hit, capturing the hearts of both Thrice fans as well as fans of worship music. Two years later, the album cycle has come full circle, and it's time for the follow-up, this time with Vagrant Records, and with it, Kensrue brings a lot of different elements that both longtime and new fans will be familiar with.

Fans looking for more worship music won't have to look hard here: Carry the Fire does have plenty of worshipful moments and vertically-focused songs. But there is also more to it than that; the opening track, "Ruby," for instance, is a great place to start. It's one of those good old-fashioned "I love you, and I'm sorry I'm not good at showing it" songs that guys sing to girls (and sometimes vice versa). Lyrically simple, it's also very relatable: "Girl I'm down on my knees, begging you please, I need another chance, but you're not looking at me, are you hearing my plea, won't you take my hand, 'cause Ruby you're all that I want, my heart and my treasure." "Juggernaut" also fits in the "love song" category; Kensrue sings, "Tell them other girls 'don't bother,' 'cause come Hell or high water, you're the only one for me, if they can't see I'm faithfully devoted to you, well then they don't have a clue, 'cause girl I'm a juggernaut, and I'll never stop loving you," along with upbeat NEEDTOBREATHE-meets-Bruce Springsteen style rock music. It's an instant classic.

My personal favorite track here happens to be one of the more inspirational offerings of the album. "In the Darkness" is an upbeat track with an irresistable rhythm, and a very uplifting message for anyone who feels lost and alone. It's almost storylike, as the lyrics begin with Kensrue talking about how he's sure that no one cares about him as he wanders through the darkness. As the three-minute song-story progresses, he feels a touch from the Lord and is instantly reminded that Jesus is there with him always. It's ministered to me, and I pray it does the same for anyone going through a dark time. Inspiring in its own different way, "What Beautiful Things" serves as a reminder of the beauty in the world, despite the wickedness also present (including the wickedness in ourselves, which Kensrue is not shy to admit about himself).

Kensrue captures several styles and sounds on Carry the Fire, but those most familiar with The Water and the Blood's overall sound will find themselves at home here still. I haven't put my finger on it, but "Ruby" vaguely reminds me of Buddy Holly, while "Back To Back" and "In the Darkness" both seem to be influenced by The Gaslight Anthem. A worthy follow-up, for sure, this is an album you'll want to get your hands on if you're a fan of Kensrue's other material or alternative/indie music in general.