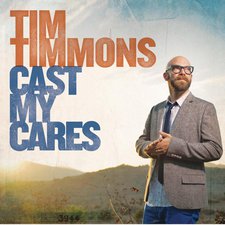 Anyone who is familiar with Tim Timmons' backstory can't help but cheer for the guy. A worship pastor for 15 years who was diagnosed with an incurable cancer over a decade ago, his faith and passion have been unwavering and he has even come to view his disease as a "gift" from which he is constantly reminded to keep everything in perspective. Last year, he was led to leave his job as a worship pastor to try to reach comfortable American Christians with the message to "[Follow] Jesus versus being a believer in Him," and as a result, we have Tim Timmons' Reunion Records debut Cast My Cares. Kudos to him! But as noble as his efforts are, the big question is what does Timmons have to offer musically that sets him apart from all the other worship artists trying to reach and change the lives of their listeners?

Unfortunately,not that much, but you have to give him some credit for trying. The very first song, "It's Your Revolution" in particular, Timmons attempts to craft for himself a sound unique enough to match his amazingly nasally vocals (which listeners will either find irresistibly charming or very annoying). But the children's choir of "la la la's," far from adding charm and flavor, gives the song more of a creepy vibe that I'm sure he was not intending on creating. But the song does a very effective job at setting up the theme and clearly laying out his mission ("More than just believing / more than words we say/  Lead on, we will follow / Your love stirs our soul / Take us where you want to go / It's your revolution"). "Starts with Me" continues in the same theme in the form of an upbeat acoustic pop worship ballad which will fit very well with the Christian AC radio crowd. The title track follows with an even more AC radio-friendly worship ballad than its predecessor; "You Remain" follows as a track with great Sunday morning potential, and "Christ In Me" brings the album's theme back in full force in the form of a big worship anthem.

But then comes the only true highlight in "Let's be Beautiful." Built on the oft-used images of the church as a bride and the body of Christ, Timmons creates a lyrically profound and moving worship ballad that is certainly the strongest on the album, and hints at serious potential as a songwriter. But that is the only true gem on the album. "For Your Glory" follows up as another Sunday morning song, featuring an instrumental interlude which would have served much better as an album closer. "I Will Follow Love" and "Great Reward" both serve as more personal ballads to pull at the listener's hearts. "Holy Unafraid" adds in one more anthemic song into the collection before the closing ballad "Only One Standing."

I cannot say Cast My Cares is not without its highlights, nor that it is in any way, shape, or form a bad album (although at least half of the album seems to fall under the category of "filler"). And Timmons clearly has a vision and a mission for his craft which is reflected in the album's airtight theme and personal and legitimately solid (at times) songwriting. But in the vast majority of cases, the only real thing that sets this album apart from other artists within the AC/Worship niche is his vocals. But overall, I do like what Timmons is trying to say, and I dearly hope that he can come to say it in a more memorable way in the near future.