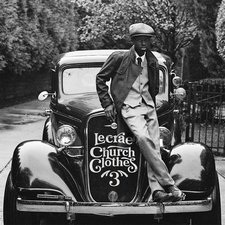 
2015 was a busy year for arguably the best rapper in the CHH game today and even though he didn't have an actual album release, it was a jammed packed year of album sales and accolades. Lecrae himself would be the first to tell you that it's not about any of those things, but as a fan of hip hop, it is nice to see such a talented man getting his message to so many people in various ways. One such way Lecrae has been via mixtapes and that's what we have in Church Clothes Volume Three.

The first track, "Freedom," gets right to the point and sets the mood for the soberness of CC3. The song speaks vividly on the seriousness of today's slave trade and a music video was released on Martin Luther King Jr. Day to drive home the fact that we can't just turn a blind eye to the horrors that go on in this world. There is a call to remember that freedom isn't free. "Gangland" features Propaganda and is simply a banging track, with Lecrae spitting hard and Prop doing what Prop does best with powerful messages, such as "delusional calling that system criminal justice, where the rich and the guilty are safer than the poor and the innocent." The song's purpose is to enlighten listeners to many of the problems that most Americans don't see. "Misconceptions 3" features John Givez, J Givens, and Jackie Hill Perry, and the four artists collaborate to destroy this track. It carries thumping beats behind each featured artist at their best, and the final product is sure to be a fan favorite. "It Is What It Is" details an in-depth journey through Lecrae's mind as he speaks honestly, "Now I'm on my third tape and I just might drop it on a Thursday" showcasing how Lecrae's focus is on his mission and not what the music industry thinks of him.

"Can't Do You" features E-40, which I'm sure Crae will catch some flak for, but the two collab for a solid track. "Cruising" has a nice and chill vibe, while "I Wouldn't Know" features KB for a solid ending to this superb mixtape. Rap fans will love the hard spitting, superb production and creativity throughout this project, much of which was produced by S1 who has worked with Jay-Z and Kayne West. Lecrae never takes lightly his opportunity to speak, though, and he delivers strong messages to all listeners here. There is so much meat to digest here making this is so much more than just a mixtape. The project is full of solid tunes that won't disappoint fans. There's also a great short film (think partial visual album) flying around the internet that was directed by Nathan Corrona (aka DJ Dust from Mars Ill) which should definitely be checked out. For a side release that was dropped on fans out of nowhere, one can't complain about anything here, even if there are only ten tracks.