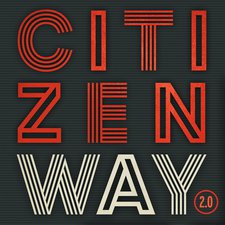 
Citizen Way's debut 2013 album, Love Is The Evidence, was well-received by fans, leaving them wanting more... and wondering just what Citizen Way would bring to the stage next. With their sophomore release, 2.0, the answer is something quite a bit different than what most might have expected. Aptly named, this release almost feels like a fresh start for Ben Calhoun and friends. While their signature rock sound remains, it's been injected with so much energy, through electronic beats and poppy choruses, that I almost didn't recognize the band when I hit play... and after several listens, I found that's definitely not a bad thing.

The album opens with "Elevated," a high-energy, rock-n-roll powerhouse. It energetically talks about overcoming tough situations, not with our own power or might, but through Christ alone, and sets the tempo for the rest of the album. "Rivals," a radio-ready anthem, paints a picture of a God that's already won for us. "...Do you feel like you're always fighting, in a war that you just can't win, so you quit before you even try. What if I said I've been there, and I'm proof there's victory over every darkness every lie. When we look to the Son, our battle's already won." These two songs give us a great taste of what's to come.

"When I'm With You," the album's first radio single, slows things down a bit, coming from a place of tragedy. Exploring how Ben coped with the miscarriage of his son, Jeremiah, and inspired by Psalm 34:18, "When I'm With You" is a song that encourages the listener to believe that Jesus will meet you where you are and heal you. While the song can get a bit repetitive, it's still a great reminder. "Bigger" sets the stage for what to expect with the second half of the album. It's a fun and energetic tune about how God conquered the grave and is bigger than anything we'll face in this life. This is probably my personal favourite on the album, not so much for lyrical depth, but simply because of just how fun it is.

The second half of the album shifts to a more electronic sound, with plenty of high energy, clap-along-and-dance tunes. "Set It On Fire" is a catchy song that really parallels with the big change in sound that this entire album brings, with a chorus that states, "This is the heart reset, this is the 2.0. This is the wave goodbye, or is it hello. This is the new me redeemed set free. Your love has sparked my heart, and set it on fire." "Just Hold On" is an encouraging song about holding on for Christ's return, knowing that He is with us through our struggles, but it did feel a bit out of place to me. "Bulletproof" caps off the 11-track album with an EDM-heavy song about how no matter what the world says or does, we don't have to be afraid because we're safe and protected in His arms. Although it wasn't one of my favorite tracks on the album, I do think it was a suitable closer to the album.

What an unexpected ride this was. If I could describe this album's message simply, it would be this: Fear not. Every song carries a message of encouragement, reminding us that our God is with us every second of every day, removing obstacles, protecting us, and preparing us to return home to Him. Although 2.0 is not without its flaws, from some repetitive lyrics to great ideas that ended up being a bit shallow in their delivery, it's clear that this group loves Jesus and is completely passionate and unashamed about sharing that with us. It is without a doubt one of the most enjoyable albums I've had the pleasure of listening to this year... I know that I had a smile plastered on my face from start to finish. Fans of Citizen Way will not want to miss this one... and if you're not a fan yet, this is a great place to start. I have no idea where Citizen Way is headed next, but I'm happy to be along for the ride.

Citizen Way's label debut, Love Is The Evidence, an almost-there-but-not-quite-yet album that brimmed with potential, made me very optimistic for their future. But instead of building on that potential, the band seems to have decided go back to square one on sophomore effort, 2.0. While the project grew on me slightly over repeated listens, many of the things that had me optimistic on Evidence (the roots-tinged pop, the audible chemistry, their firm grasp on their identity) were either reduced or had vanished altogether. Instead, in a similar vein to The Afters' Life Is Beautiful or (more recently, and more dramatically) Nine Lashes' Ascend, they have opted for an electronic pop sound nearly indistinguishable from the CCM stereotype. In short, Citizen Way has totally lost their identity on 2.0. While moments of clever songwriting and an energetic opening track elevate the album above a total pass, it is hard to understand the band's decision here to abandon an approach that they could have pursued and perfected just to leap into mediocrity by starting all over from scratch. - 3/24/16, Mark Rice of Jesusfreakhideout.com