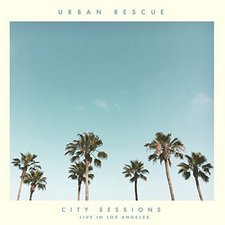 
Urban Rescue, the self-described "revival band" from Los Angeles, California, has been releasing solid contemporary worship releases for most of a decade, led by singer/songwriter Jordan Frye. I first caught on to the band with the 2014 EP, Wildfire, but the group found its greatest success yet with last year's Wild Heart, especially with its single "Song of My Father." According to Frye, the band's latest release, the audio/visual EP City Sessions (Live in Los Angeles), originally came to fruition after many fans requested that the band release acoustic music. What's being offered in these seven songs should please those Urban Rescue fans, with predominantly new material and two moving collaborations.

For a band that revels in synths and electronic beats, the band's foray into the "stripped down" is predictably modern: these live recordings contain a mix of acoustic instruments (cello, drums) and electric (keyboards, drum pads). Also, the whole EP was created with videos for each song, presenting the three band members and a host of guest musicians performing in a circle, surrounded by stage lights. In a music culture where so many worship albums are recorded (or pretend to be recorded) in front of a live audience, it's nice to see Urban Rescue doing the "live album" differently. The results are scattered, though. When watching the video for the opener, "Freedom," I was shocked to see that there were seven musicians involved. This might merely be a critique of the mixing, but the songs are airy and spacious when they could've turned out much fuller. Admittedly, overusing drum pads doesn't help, but the mix most predominantly shows off Frye's lovely voice. On "Freedom," his voice has an inflection that sounds like Brandon Flowers. Little things like that give Urban Rescue character, whereas it would be easy to sound like everyone else.

The most exciting moments come from its two guest rappers: Mike Nelder on "Up from the Ashes" and Derek Minor on "Walls." "Ashes," along with "Never Stop," is a carryover from Wild Heart, and while this new version lacks the epic nature of the original, there's a beautiful extended ending. Nelder performs the same poem as on the original, but it's no less powerful: a minute-and-a-half long confession of our desperate need to hand over control to God. Meanwhile, on "Walls," Derek Minor steals the show with an abrasive rap that takes the focus off of vertical worship towards social justice. It's unforgettable, including the lines, "We spend $9.99 on Spotify / But hearing my stomach rumble ain't worth a dime?" and "Pride and money / Are you a slave to them? / Cause you ain't gotta be black to pick cotton / Off the shelf of an H&M." Unfortunately, as the shortest song on the EP, "Walls" ends far too soon, (and rather abruptly, which is both jarring and confusing).

The best song overall is "The Reason," a new song that easily outshines the others, with spot-on lyrics about living in God's presence from day to day, with beautiful melodies that invite more Flowers comparisons, especially from The Killers' Battle Born. It doesn't even make sense that Frye can write a song as good as "The Reason" by himself when "Freedom" wastes its four co-writers (including Kristian Stanfill) on a series of cliches. Urban Rescue's lyrics have often leaned toward fluffy, but the worst offender is the piano ballad "Unconditional." It's sung from God's perspective, which is hard enough to pull off, and this attempt is rather clumsy. The pseudo-poetic lines lack concrete meaning, and there's no clarity as to whether this song is meant to be aimed at believers, non-believers, or both, all of which would have different theological ramifications.

If you go to YouTube, you won't be able to find the live videos for all these songs (as I'm writing this review), but they'll be coming out weekly over the next month. Yet, from the videos currently available, City Sessions is better experienced seen than simply heard. There's a multi-cultural set of musicians playing an elaborate mix of instruments with passion. If we see Urban Rescue tackle a project like this again, though, it would be nice to see a little more effort put into the audio presentation (some of the vocal editing is sloppy and I swear you can hear someone talk at the 0:40 mark in "Ashes"), as well as the songwriting. I'd love to see a City Sessions, Volume 2 with songs that capitalize on the potential of "The Reason" and "Walls." And as a big fan of the Wildfire EP, I know Frye and company can do better than this.