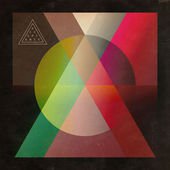 
Twelve years in between albums suggests that an artist's music will drastically change, and change is exactly what we get with Colliding By Design, the sophomore release that most Acceptance fans, myself included, never thought we'd see. The clamoring of fans and a providential aligning of circumstances allowed the band to reunite in 2014 after originally disbanding in 2006. During the interim, most of the band disappeared from the music scene, other than Christian McAlhaney, who joined Anberlin. Vocalist Jason Vena separated himself from writing music entirely, showing his face only for cameos on songs by All Time Low and Ivoryline. This begs the question, what should we expect from a band that's been broken up for so long?

It comes as no surprise, then, that the greatest strengths of Colliding By Design are when it sounds least like Acceptance's debut, 2005's Phantoms. Aside from "When I Was Cursed," which will delight longtime fans with a "So Contagious" callback, there are no attempts to pander to the band's old self. Colliding is thoroughly updated for 2017, while simultaneously stealing from the 80's. Much of this change should probably be indebted to producer Aaron Sprinkle; in fact, it's impossible to imagine how different these songs would be without his distinctive sound design and his ear for synths. Acceptance isn't the guitar-rock band it used to be, as there are no walls-of-guitar or big riffs; everything here is constructed carefully and tastefully to best suit Vena's catchy melodies and great-as-ever performances (even if that means the guitarists play way too many U2-styled arpeggios).

At times, though, these songs feel too constructed, as if they were built inside a digital interface rather than played inside a practice space. This seems most true on the two lead singles, "Diagram of a Simple Man" and "Haunted." The first verses of both are rhythmically disorienting, with empty drum beats that don't line up with the guitar parts or the melodies. Thankfully, this issue is amended with the title track, "We Can Escape," and "Come Closer." All three songs have jaw-dropping verses, equal parts catchy, fun, and beautiful, culminating in the bridge of "Come Closer," the album's most thrilling section. Here, the musicians flex their muscles, wrapping Vena's voice in dark, atmospheric chords in a manner that provides a great contrast to more chipper and lightweight songs, "Fire and Rain" and "73." The most rocking song is "Goodbye," which contains all the ingredients of Jonezetta's album, Popularity. Too often, though, the verses of these songs upstage the choruses; for an album inspired by 80's pop, having non-catchy choruses is detrimental.

The runaway standout is "Sunset," in part because it's so different than everything else, with boomy toms and tropical guitar licks that bring to mind St. Lucia. There's no arguing "Sunset" is the least-Acceptance-sounding thing the band has ever released. More importantly, it's a great pop song, filled with hooks, each as memorable as the others. "Sunset" validates Acceptance's ability to pursue different styles, and they should continue doing so. If there's one element that really needs touching up, though, it's the lyrics. Most songs lack thematic cohesion, favoring vague statements over concrete details. Analogies like, "we live in black and white / we dream in color" just don't work, and quasi-clever lines, like "the first time's the last time," might make a discerning listener wonder if these songs mean anything.

I don't hold Phantoms in particularly high regard; I loved it upon release, but the record hasn't aged well with me. Unfortunately, I'm experiencing a similar decay with Colliding By Design. On day one, I loved every second of the album and listened four times in a row. Now, when I finish listening to it, instead of wanting more Acceptance, I'd rather go hear Aaron Sprinkle, Jonezetta, or St. Lucia. I'd still argue that Colliding By Design is an equal to Phantoms, and I hope this album sustains more joy for other fans than it has for me. Frankly, we didn't deserve a second Acceptance record, and we had no reason to expect one this good. I'm glad Acceptance is back, and who knows? Maybe we'll live to see album number three.