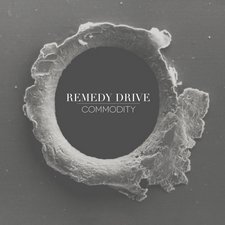 "For the first time in about 7 years," said frontman David Zach, "Remedy Drive is making a record on our own."

Remedy Drive have been a staple in the Christian Rock industry for about sixteen years now, since long before their first release on a major label in 2006. And honestly, it shows. Good or bad aside, their newest endeavor, Commodity, possesses all of the hallmarks of a band who has scrapped themselves to maturity. They've weathered the tricky waters of member changes, raised money independently of a label to fund this record, and have learned the value of making an album that is a cohesive whole, rather than just a collection of singles.

Indeed, Commodity is a concept album of sorts, based around the devastating and enormous human sex trafficking industry. Zach felt the inescapable tug to be another crucial voice in speaking out against sex trafficking after traveling to red-light districts with members of The Exodus Road - an organization devoted to freeing people enslaved by the sex trade. "This record is going to take us into a dark place," Zach says on the band's Kickstarter campaign. "Hopefully, in that, it will inspire us to be a part of a movement."

Commodity does indeed inspire us to be a part of a movement, and it takes it a step further: it doesn't dwell on the darkness, but rather points continuously to the hope on the other side. Among the album's most pervasive themes is the dichotomy of light vs. darkness, and light is triumphant every time. "We'll make our way back home, because the King is still on the throne," insists the airy, bouncy pop anthem "Throne." "I can hear the bright notes over all of the dissonance," Zach sings on "Under the Starlight." Every song on this record serves as those bright notes in a sea of dissonance, as they point to the future hope of the coming King, Who will right all wrongs, defend all of the slighted, and wear justice like thunder on His sleeves.

And you can hear that thunder on the soundtrack. At every turn are huge drum sections and deep, cutting bass runs providing the backdrop for the Zach's processed vocals and Imagine Dragons' "Radioactive"-esque sound. The album was clearly mixed to be turned up loud and rocketed out to combat darkness.

Because it's a concept album, Commodity can be played through from front to back and have it feel like one big, long treatise. The songs blend together with ambient strings and reverbed noises, so that the end of one song is the beginning of the next. But this is also my biggest complaint about the album: it is flooded by sameness.

I've listened through it several times now from front to back, and there isn't a song that sticks out as being its own. They're washed with processed, hip vocals, they have booming, thunderclap drums, and they sport extensive synthed-out, thick production, but no track here says, "hear me!" Ten of the twelve songs are written in only three different keys. The anthemic choruses, perhaps interesting on their own, get lost in the sea of each other.

This is not to say that it sounds bad at all, but when David Zach says, as he did in the aforementioned Kickstarter campaign, "There are no rules, no boundaries I've never been able to feel like there's not going to be any pressure to say it or sing it a certain way," more innovation is expected than is found on Commodity.

Remedy Drive have crafted a good record here. It shines brightest in its instrumental sections, like in "Commodity," "The Wings of the Dawn," and the entirely instrumental "The Sides of the North," which sounds like early Mutemath, particularly in Tim Buell's quite exceptional drumming.

Commodity is a good record. There are moments here that are blasts of fresh air and spots of light in a landscape of darkness - particularly the good production and the above-average instrumentals. But it simply feels too safe to be a great record. Among other releases this year in the Pop/Rock world, it's certainly worth a listen, particularly the refreshing "Take Cover" and "The Sides of the North." Its message makes it stand out, for sure, and is, if anything, the reason you should check it out. You may not love it, but you're certainly going to like it.

The latest effort from Remedy Drive just might be the most ironic album of 2014. Indeed, at a time when soft-pop performers like Chris Tomlin all but rule the airwaves and the thought of any radio-friendly artist releasing praise-oriented material is nearly as sure a thing as the sun rising the next morning, who would have guessed that a rock band's concept album about human trafficking would just so happen to be one of the best worship releases of the year to date?

In fairness, the sunshine pop of "Under the Starlight," the terse textures of "Dear Life," and the bracing, almost martial title cut aren't likely to be confused with Matt Redman any time soon. And the superb, semi-progressive instrumental, "The Sides of the North," has far more in common with late '70s one-per-album offerings from, say, the Alan Parsons Project than it does with anything generated by the Hillsong label. That said, true worship music isn't limited by musical genre or audience expectations. And even though the lyrics of songs like "Take Cover" (Come home, child/ Windblown, by trial) and "Love Is Our Weapon" (Riding on the wings of freedom/ I'll take you to the east of Eden) are undeniably aimed at those exploited by the sex trade, their overriding sentiment applies equally well to anyone seeking intimacy, comfort and encouragement from the Divine - the absolute hallmark of that which is most truly worshipful.

Listeners who went in for the glossy pop/rock textures of the last two efforts will probably take a liking to the new project as well. But, while the bulk of Commodity sounds much like its predecessors on the surface, successive listens reveal just how unique - and superior - the latest release is. This wasn't an easy album to make. The band felt strongly enough about its subject to break ties with its record label and record it independently. Hearing the fruit of their undeniable passion, though, most fans would have to agree that the end results were well worth the risk. - Review date: 9/27/14, Bert Gangl

Remedy Drive has created their seminal album in Commodity. Strong percussion and a distorted baseline support the band's emotive piano melodies as former member Phillip Zach (who last year made the impressive solo project Arrows & Sound) returned to supply the production. Not surprisingly (as the album was inspired with David Zach's experiences against human trafficking), these songs carry a strong emotional weight, such as the tearful album highlights "Wings Of The Dawn," "Under The Starlight," "Cool Of The Day," and the instrumental Arrows & Sound-esque "Sides Of The North" (which revisits the melody of "Wings Of The Dawn"). A top-ten album with several candidates for top-ten songs, Commodity is not an album to miss, even if you hadn't been enthralled with Remedy Drive in the past. - 9/21/14, Mark Rice of Jesusfreakhideout.com