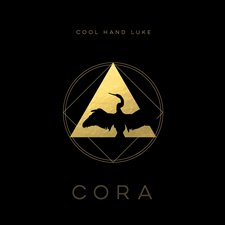 
When Cool Hand Luke released Of Man, a brilliant conceptual release recounting the final hours of Christ and his disciples, many believed that that would be the last release from the ambient pop/rock act. Lead vocalist Mark Nicks was the sole remaining member at the time, cementing Of Man as a memorable farewell for the band. So, six years later, a follow-up was something unexpected and surprising in a myriad of ways.

Throughout these eleven tracks, Cora establishes itself as an album of rediscovery. It's nostalgic, but it also doesn't forsake experimentation, and this ambition causes Cora to stumble more often than not. The sound and the essence are there, but they've been approached more amateurishly than before. However, that's not to say the album misses the mark entirely. "Sing For You" melds the band's signature ambiance with crunchy guitars and a subtle electronic backbone, and it's by all accounts an album highlight. "The Old Man Lies" is a haunting piano ballad that melodically recalls the best moments of Of Man. "Excavation" is another track of note, featuring a menacing melody and frantic pace paired with one of the most memorable choruses on the album. "A Space That's Yours" and "You Are Here" are also captivating piano pieces that deserve some acclaim. The former is a lovely tribute to Nick's daughter, whom the album was named after, while the latter is a fine, albeit predictable, album closer.

Lyrically, Cora touches on many relatable and profound topics, including faith, love, doubt, and identity. Opener "Hidden In Waveform" looks at the struggle to communicate powerful and important messages in song, "Will the Holy Ghost haunt these lines / Or is it up to me this time? / Hidden in a waveform / Will my heart shine through, can I sing the truth? / When I speak to them will I speak of You?" The aforementioned "The Old Man Lies" speaks from a Christian who struggles to align his identity with how he feels as opposed to the truth of who he is in Christ, "If I'm playing to my strength, I'm playing to You / 'Cause I'm the weakest man that I ever knew / I'm older than I look / But not nearly as wise / I believe the truth, I believe the lie / I'm broken on the floor, with my hands tied / I'm broken on the floor, but the old man won't die." "I Will, I Won't" sings of the desire to be fully known, yet fully loved and how those two desires can oppose each other, "I don't wanna be hurt / And I don't wanna hurt you (I will. I won't.) / I long to be known / But what if you really knew?"

The occasional experimentation is where the album, unfortunately, doesn't work quite as well. "Taking Chances" makes use of a groovy bass line, but the lack of an infectious vocal hook hurts it after repeat listens. "I Will, I Won't" is the weakest cut musically as it builds into a cacophony of noises that's just unpleasant to listen to; and other tracks, while not as experimentally adventurous, are simply forgettable in the longrun ("Holy Vanguard" and "Backlit").

It wouldn't be fair to label Cora as a complete disappointment, but it is one of the weakest Cool Hand Luke records to come out in recent memory. Hopefully, the growing pains will cease here and future records will find Nicks at his best once more. Until then, Cora is a serviceable comeback that will satisfy longtime fans, but if you're new to the band, you may want to start with Of Man or The Sleeping House instead.

In an era where bands from the past are reuniting to various degrees, it seems that music fans are being surprised with unexpected new music left and right. Perhaps one of the more highly-anticipated acts to do so is Cool Hand Luke. After a six-year hiatus, Mark Nicks is back with a new CHL album called Cora. The album features Nicks' brand of piano-led indie pop that dives deep into human emotion, but repeat listens don't tend to stick, unfortunately, resulting in a rather forgettable album. While some artists get back together with virtually no rust, Cora doesn't quite live up to Cool Hand Luke's name. - 9/30/17, Scott Fryberger of Jesusfreakhideout.com