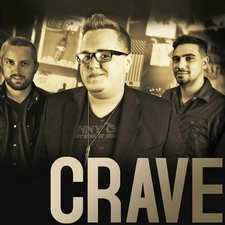 Dream Records' recent ascent has brought many new artists to the forefront of the Christian music industry. While introducing new artists can be an exciting experience, it can also grant a band or individual a premature stage. Crave's self-titled debut displays exactly where the label fell down on the job. Crave simply isn't developed enough as an album, and fails to offer listeners much originality.

The first track, "Never Be The Same," opens the album with a strong sound, which is sadly dragged down by lyrics such as "all I can say is that I'm crazy in love with You." This creates an uninspired tone that detracts from what promises to be a passion-filled project. The album improves with "Ring the Bell" and "We Don't Care What They Say," though the latter again flirts with overtly-clichéd lyrics. Nonetheless, the album oozes into a sort of monotony from this point on. The typical four-chord worship songs and repeated lines (and repeated lines and repeated lines...) just keep coming. Now, if this is the type of music that you regularly enjoy, Crave should be right up your alley. In terms of artistic quality, though, it's wistfully uncommon to hear a song which differentiates itself. To my delight, "Come to Me" is able to break this trend, and mark itself as the best song on the album. The chorus "come to Me and I will be everything you need; I'll take all your fears, wipe all your tears and pick you up when you fall. So come to me!" emphasizes the love of the Father in a way which is simple and worshipful.

"Need" is also a solid track which is evocative of bands such as Big Daddy Weave. It has a catchy melody and meaningful lyrics. The closing (bonus) track, "I Can't Stop," is also noteworthy. The beautiful acoustics draw out the lyrics in a short, piercing arrangement. ("I can't stop what I'm feeling; I can't hide how I feel inside. Your love is like Heaven; it's gonna last for all of time.") Although Crave is a complete project with a healthy running time of 47 minutes, there's just no legitimate depth to the band's message, beyond that which is found in the Sunday morning worship scene. In a day and age where "praise bands" are a dime a dozen, emergence as a distinguished and original band is a necessity.

By all means, Crave is good in and of itself; it just fails to bring anything new to the stage which hasn't already been done better. The melodies aren't particularly original, and neither are the lyrics or thematic elements. The band does have talent, though, and by no means should they be counted out. Hopefully a future release will build upon their strengths and lead to the discovery of a prominent sound which the band can own.