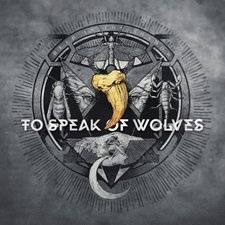 To Speak of Wolves
Dead in the Shadow


At its best, To Speak of Wolves' comeback album revels in controlled chaos. Dead in the Shadow is the metalcore band's first full-length in five years and is also the band's return to Solid State Records, following a very solid EP released by Cardigan Records in 2016. That collection, titled New Bones, showed a lot of promise for To Speak of Wolves, but Dead in the Shadow fails to follow through on that promise, instead offering a frustrating mixture of styles and influences that invite comparisons to dozens of other bands.

Album opener "Haunt Me" is one of the album's brightest moments: a grand display of the aforementioned "controlled chaos." Recalling aspects of Underoath's Define the Great Line, "Haunt Me" is catchy in its heaviness, without relying on conventional choruses or melodies. The Underoath comparison isn't particularly random, either; the band's sole remaining founding member is Phil Chamberlain, brother of Underoath's frontman Spencer Chamberlain. Elsewhere, "Deathbed Chimes" is amusingly similar to Norma Jean's "Deathbed Atheist." (To be fair, Wolves had an album opener titled "Hivemind" a year before Norma Jean opened an album with "Hive Minds.") There's a fascinating similarity between those three Solid State acts: all of them built notoriety off their debut albums, only to unexpectedly lose their frontmen. Each band replaced its frontman successfully, and few fans seem to point to any of those debuts as their respective best works. However, in many regards, To Speak of Wolves is still trying to live up to the reputation of its second album, and first with frontman Gage Speas, 2012's Find Your Worth, Come Home.

While Speas more than filled the shoes of his predecessor with the sheer rage of his screaming talent, original vocalist Rick Jacobs was much stronger with his "clean" singing. Ultimately, it's the band's tendency to play outside of its strengths that sinks Dead in the Shadow -- Speas' clean vocals being perhaps the most notable weakness. Take the closing track, "I Am the Shovel I Am the Grave," for example; it's an out-of-place acoustic number with odd imagery and poorly performed melodies. As a slow-burning acoustic number, it seems tailor-made to be an album closer, yet the song ends so abruptly that it fails to serve its purpose well. Compare this with the penultimate track "Touch" (which would've made a fantastic closer); it's a harrowing, nearly frightening track with layered screams, relentless and uncompromising in brutality. It's the best song present, pairing the chaos of "Haunt Me" with terrifying elements and a crushing ending. An album filled with songs like this would highlight the band's strengths and almost assuredly make for the band's best album yet.

Unfortunately, the rest of the album is a mixed bag. "I Had To Let Go" is memorable, with a fair share of surprises, but the overly-compressed guitars work against the song's favor. That song ends with the lyric, "What I hate about you / Is what I hate about myself," repeated four-fold. It's effective, but it's about as good as the emo-leaning lyrics get. Speas relies on that tactic far too often, repeating his most heart-on-sleeve lyrics two-to-four times in a row, from "I gave up on you / You gave up on me" to "I wasn't born just to be abandoned" to "I can't forgive you." The choruses don't always gel, either. On "The Impaler," the poppy chorus is a jarring tonal shift. Possibly the best chorus is on "Enemies of Everyone," but the random inclusion of synthesizers makes the song sound like it belongs on Bring Me The Horizon's Sempiternal. "Enemies" doesn't come close to how well Architects married synths and hardcore on last year's All Our Gods Have Abandoned Us. "Braided Bay" invokes the guitar stylings of Beloved, but the odd dynamics keep the song from going anywhere. One excursion into southern, swampy territory on "Ashes Over My Eyes" recalls Maylene and the Sons of Disaster as well as He Is Legend. However, the straightforward drums here (and elsewhere) cause even the stylistic shifts to blend in with the rest of the album, unlike He Is Legend's latest, few, where some inventive drumming gave each track extra character.

Just looking at full-length albums, it would be easy to say that To Speak of Wolves are rusty from a long break. That would be to forget about last year's EP, though, which was a stronger effort overall than this. What I see happening on Dead in the Shadow, then, is something of a genre-identity-crisis, attempting to stretch the band in many directions instead of sticking to what the band does best. Ironically, these divergences make for a blander record than previous efforts, with little to distinguish songs from one another. If the band can follow this album up with an airtight collection of "Haunt Me"s and "Touch"s, it would be unstoppable. But if the next album has a bunch more "Braided Bay"s and "I Am the Shovel"s, I'm afraid this potentially-great band won't be dead in the shadow -- it'll just be dead.