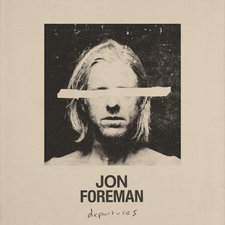 
There are very few things you can count on in this life, but the changing of seasons is one of them. You can also safely bet that Jon Foreman is somewhere with an acoustic guitar in hand, writing another set of stellar songs. Whether it be his main gig Switchfoot, a side project like Fiction Family, or solo projects, the man seems to have no shortage of inspiration for innumerable tunes. Here on his newest solo offering, titled Departures, Foreman delivers twelve of his most explicitly Christ-centered songs of recent memory. While he's nearly always offered hope in the face of pain and called for love in a more implicit approach, Departures finds him name-checking Jesus directly. He sounds worn but not devoid of faith--no, not by a long shot.

Highlights aren't hard to find beginning with the hauntingly-epic "The Ocean Beyond The Sea." It has a hymn-like quality to it as it builds and builds to an explosive conclusion with an intense string section and drums leading the way. Due to its water-based subject matter and tone, I could hear indie nautical-rock band Rusty Shipp doing a killer cover justice. Switching gears from there, "Education" swings toward the playful and upbeat. On the next two songs, female artists Madison Cunningham and Lauren Daigle join the fray on "Side By Side" and "A Place Called Earth," respectively. While the former slows things down and has Cunningham backing him with gentle nuance, Daigle takes verse two of the latter, lending her powerhouse vocals in a more prominent way the slow-burn song demands. All in all, it's a fantastic one-two punch that lands just right.

"Jesus I Have My Doubts" is honest and heartfelt while being respectfully bewildered about the state of the world. The entire song contains Jon's career strength of communicating a weary hope in the face of hopelessness. The bridge is emotionally charged, with the lyrics, "Are you there?/Can you hear me?/Do you care? Are you near me?/Cause Im scared and Im weary/Are you there?/Can you hear me?/Are you there?" The song fades out open-ended, with Jon voicing his doubts, yet laudably clinging to the mast of the Maker. Songs "Thanks Be To God" and "The Gift" find Jon following his doubts up with gratefulness, thanking God for delivering him from his internal war and calling us to remember the gifts of faith, hope, and love.

"The Valley of Planned Obsolescence" returns to the playful tone with a cello featuring high in the mix, steady march-like drumbeat, bouncy melody, and whistle solo collaborating to make a jaunty smile-inducing tune. Referencing now obsolete things like yesterday's supermodel, MySpace, CDs, and social media, Jon bemoans getting old with tongue firmly planted in cheek. Then in a sweet twist, he lovingly croons to his wife, "and how will we know when the final chorus dies?/On the day my spirit flies/I want to be with you/Just holding hands." Indeed, it's a call to treasure the lasting things, namely relationships, while letting the temporal fade to the next fad of the moment.

Overall, Departures is another album in a long line of fine releases bearing the mark of Jon Foreman. Laudably, he puts his storied career to use in reminding us all that every departure ends with a new beginning, just like the mercies that come with each new day. This reviewer has been impacted deeply by his creative output, benefiting from his honest questions, doubts, and stubborn grip on belief despite it all. Jon balances well the fine line of pointing out the problems of this world and admitting his culpability while also turning his gaze (and in so doing ours as listeners) toward the Savior who remains faithfully the same. While it would be easy to take his work for granted with his prolific output certainly spoiling listeners (there is a likely Switchfoot album releasing in 2021 as well), it would be a mistake to slough this one off as "just another record." In fact, what we have here is an album of the year contender, sure to make many a year-end top-ten list in 2021.

So far in his solo career, Jon Foreman has captured the spirit of the seasons and written a song for every hour of the day. Those projects were done in the EP format, but for his latest release, Departures, Foreman chooses the more traditional longform album. Coming out of the tumultuous year that was 2020, Departures wrestles with doubts and a world falling apart while offering hope in the only place where stability can be found.

After starting off with the fantasy-esque "The Ocean Beyond the Sea," the rest of the first half leans more into hard times and doubts, culminating in "Jesus, I Have My Doubts." While the other tracks on this side of the record dabble with hope, or at least let the music lighten the mood, track six is more stripped down, with Foreman singing in a world-weary voice. It ends with the stinger of "Can You reach me here in the silence?/I have my doubts." Depending on how you read that line can determine whether or not this half ends on a down note or an upbeat swing. Foreman doesn't let the depression linger as the second half begins with "Thanks Be to God," a song that could make its way into a church band's set. This back half is definitely angling for a more hopeful tone, slowly building to the more bouncy "The Valley of the Shadow of Planned Obsolescence" which contains a great line about CDs "in the Goodwill's hands."

Departures is an up-and-down album, which is part of the point. Unfortunately some parts of it feel disjointed. The back half feels more uniform than the front, which experiments with different styles and techniques. The experimentation is interesting but also makes the songs seem more cobbled together than cohesive thoughts on a year when everything got upended. But, this is Jon Foreman we're talking about here and while the album may not rise to the heights of greatest concept record ever, it is a quality offering. Filled with hope and willing to wrestle with doubts, Departures is an early 2021 release worth checking out. - Review date: 2/8/21, John Underdown of Jesusfreakhideout.com

With Departures, Switchfoot frontman Jon Foreman tries to process the craziness of the past year with 12 songs that take a hard look at life and faith in the midst of confusing and heartbreaking times. The album continues Foreman's folk and acoustic-driven stylings, but adds a bit more of a pop feel this time. Songs like "Side By Side (feat. Madison Cunningham)" and "Education" will get stuck in your head, while fellow believers trying to make sense of the current crazy world will find it easy to relate to "Jesus, I Have My Doubts," while being encouraged by "Thanks Be To God." All in all, this collection is some of the best solo work from Foreman yet, and a great way to kick off the new year. - 2/11/21 John DiBiase