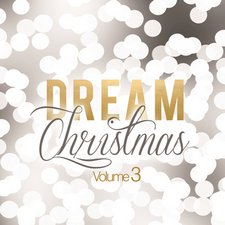 
With Christmas albums being released as early as October 2 this year, it's refreshing to see Dream Label Group releasing their third Christmas compilation at a more reasonable time--right before Thanksgiving. Evenly split between brand new and previously released material, Dream Christmas Vol. 3 offers a fairly decent collection of holiday tunes (most of them pointing to Jesus) with a few gems scattered throughout.

This twelve-track compilation represents the eclectic Dream roster of rock, pop, worship, and Gospel artists. The only thing that seems to be missing is their EDM sub-group, DROM. One would think their new EDM artist Matthew Parker would fill that role, but instead, he opts for a more pop-based electronic sound on that standout track "Lovely Christmas Nonsense." This satirical Christmas original may be a bit cheesy, but the fun string sample, fuzzy synths, and a snappy electronic drum beat make it a really catchy tune. Though Parker's electro-pop song is an early highlight, it's Nightlife Worship that takes the spotlight with their fantastic rendition of the Christmas carol "While Shepherds Watched Their Flocks." With an assortment of instruments ranging from triumphant horns to a sweet thumping electronic kick drum, this song is intricately crafted, providing a fresh, creative backdrop to a three-hundred-year-old classic. They go through all six of the original verses here, celebrating the birth of Jesus and worshiping God in each: "All glory be to God on high, and to the earth be peace / good will henceforth from heaven to earth, begin and never cease." There are a few other solid cuts like the new song "Emmanuel" from the alternative rock band Elliot and the cover of the Irving Berlin classic "White Christmas" by NewSpring--an odd choice for a worship band, but nonetheless a pleasant, mildly bouncy tune.

While the sonic variety on this compilation is quite welcome, there is a certain unevenness to this album due to songs with lower production value or lack of originality. "Silent Night" by Soulfire Revolution suffers from both. The quietly epic soundscape is lovely enough, and the lyrics to this classic carol are always good, but with a lowered overall volume and little uniqueness to offer, it is a relatively forgettable track. This problem also happens at the end of the album with the Spanish version the same song by Generacion 12, largely because it uses the same musical backdrop only with updated Spanish lyrics. Another track that hinders the album is "It's Your Presence Lord," which was first released nine years ago on Tommy Walker's Christmas album, This Is What Christmas Means to Me. The music is solid--what starts off as a quiet acoustic guitar led tune slowly adds a Broadway-styled drum beat and a gospel choir--but the songwriting is lacking and the song is simply too long.

The songs that land between the stronger and weaker tracks each have some distinct characteristics that give this album some personality--whether it be Jasmine Hurtado's 14 year-old-vocals on her 2013 recording of "Oh Holy Night," Gary Kean's jazzy fireplace tune "This Christmas With You," or the smooth Hawaiian vibe from New Hope Oahu's take on "Mele Kalikimaka." Though there is some promising talent here, especially Nightlife Worship, it would have been nice to hear a Christmas song from Dream's most impressive artist, Jonathan Thulin. But for what it is, Dream Christmas Volume 3 is an enjoyable listen. If you are a Christmas music enthusiast, you will want to give this album at least one spin.