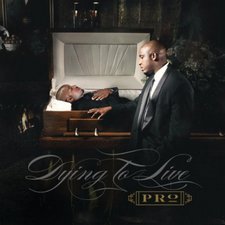 One of the most underrated and overlooked rappers in the Christian industry, PRo, recently released his first full-length album on Reach Records (he also released the PSA Vol. 2 mix tape earlier this year), Dying to Live. After listening to the album several times two things came to mind: 1) This is the best Christian rap album since Lecrae's Rehab and 2) PRo is the number two rapper on my shortlist.

Dying to Live opens with some poetry before the first song kicks in almost a minute into the track. PRo starts in early with his cleverly placed pop-culture references that litter the entire album. PRo says, "As I yield to the wickedness inside me I attempt to play God like Bruce Almighty, or Jim Caveziel; sin deceives you." He also manages fit in a Dark Knight/Heath Ledger reference as well. "Mission to Mars" features a lyrical favorite as PRo proclaims, "Ain't no turning back boy; I have just departed. It'd be Looney Tunes to quit, Marvin Martian. Yeah I'm on a mission, I ain't worried 'bout no hat-or; I'm blowing up this gospel with my space modulator."

PRo isn't just about clever lyrics and references though. The album could be mistaken for a sermon just as expected from a Reach Records release. PRo also hits on some more sensitive issues. More pointedly: sex. Sexual impurities are brought up in several songs and touch on different areas of sexual sin. "Get This" talks about sex outside of marriage with, "If you're feeling like a pimp then go on brush your shoulders off, but you can be a pimp and catch something ya ain't brushin' off. And women don't give it away to get 'em, if you only finding dogs you probably lookin' in the kennel." "Before I Die" talks about sex with multiple partners and infidelity within marriage. "This Can't Be" touches on prostitution and "So Far Gone" reveals the dangers of pornography. Lastly, "Beautiful" brings home the message to a struggling girl that she is crafted by God and is beautiful no matter what our sexually driven culture may say.

"Full Court Mess," which sounds similar to something from the 116 Clique's Amped EP; "Merked Pt. 2," which references notorious gang leader Larry Hoover and features a sample of "Flight of the Bumblebee;" and "Going In," featuring Lecrae and Tedashii, are favorites and can contend with any song in the genre. "No Limits" is another solid track that says there are no limits to what we can accomplish through Christ. The second verse of the track features my favorite and most in-depth reference in the album. The reference is based off of the title of the track and refers to rapper Master P's "No Limit" crew from the mid-nineties, "Yeah, I ain't mystical (Mystikal), but I ain't the same since they done murder see (C-Murder). You can tell me what you want, but sin no longer master P[Ro] (Master P). I let the gospel super shock 'em (Silkk the Shocker) hopefully you feel me." He goes on, "Fighting everyday though just like Cain and Abel (Kane & Abel). Cause Christ was true to me when your boy was dead wrong; so I go hard for the body, get my Mr. Serve on (Mr. Serv-On)." Finally, he ends the verse with, "Truth up in my heart, I can live without it. That's just what I'm on; Call me 'bout it, 'bout it" ('bout it, 'bout was a common saying of this group). Though it's not a Christian reference, I love how PRo is able to craft this ungodly group of rappers into spiritual relevance.

PRo brings it from all angles and has truly released a hard hitting, in-your-face album that will make you see that life in Christ is indeed worth dying for. This isn't your typical gospel rap record, or Christian music as a whole for that matter, as PRo shows no fear in tackling tough issues some tend to avoid. PRo should clean off a shelf now; this is the rap/hip-hip album of the year. If you're a fan of rap and hip-hop and don't already have this album I can only ask, "Why not?"