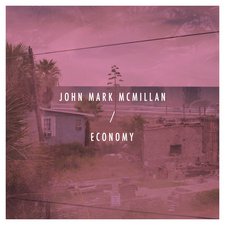 Integrity Music has always sought after worship artists from all different styles and perspectives; from the gospel greats of Israel Houghton and The Brooklyn Tabernacle Choir to worship leader legends such as Brian Doerksen and Paul Baloche, "varied" has always been a key word to define Integrity's slew of signees. But even recently, the label has gone out of their way to find less-traditional talent, and John Mark McMillan is among the most exceptional. With the Integrity re-release of his independent album The Medicine only a year old, he has elected to release his next project as a signed artist, simply titled Economy, and the result does nothing to detract from his musical decorum. In fact, it strengthens it.

As The Medicine already demonstrated, McMillan's music approach can be described as rock n' roll that's "rough-around-the-edges." His vocals are gritty, but rich and deep, and his musical atmosphere could be described the exact same way. Whether it's a lone acoustic guitar left to croon or a full-on southern rock force, it's a unique style to pair with heartfelt worship, but it's worked before, and it works even better on Economy. While The Medicine carried very much the same style and carried itself with gravity, each track carried uniqueness to the point of almost clashing with other tracks on the album. In this sense, each song was great, but they didn't necessarily always sound equally great together. In contrast, Economy feels far more like a cohesive piece of art, each song purposefully placed in the listening experience that only improves the record overall.

"Sheet of Night" begins the album with a somewhat typical rocker with a standard worship front; in essence, it may be the weakest track on the album, but it successfully sets the stage for the rest of Economy's flight of significance. From there, it only gets better. From the catchy handclap background of "Daylight" to the somber façade of "Murdered Son" to the triumphant closer "Seen a Darkness," it's a musical journey of faithful passion and surrender. "Our Hearts Bleed" is a great example of McMillan's ability to create anthemic singable worship songs without compromising musical or lyrical quality. The title track, possibly the album's best cut, goes all out with guitar solos and a cutting chorus to boot ("I believe you can overcome my economy/You can dig me out of the grave").

McMillan takes things slowly and methodically when it most matters, however. "Love You Swore" feels similar to The Medicine's "Death In His Grave" with a choir's "woahs" to create an semi-ominous, but nonetheless effective chorus, but it's an honest commentary on the believer's common fears and the need for the Savior's protection ("Chase me down like a lion, like a bird of prey/Lift me up from the ashes of my hearts own shallow grave/'Cause I know that I love you, but sometimes I'm afraid"). "Who Is This" feels mostly instrumental, but its few words provide an intense moment in awe of God to bask in His majesty behind the music. "Sins as Stones" is equally moving, and the all-acoustic "Chemicals" only becomes more and more haunting as the song progresses.

Integrity Music is blessed to have McMillan on their roster, as his insightful artistry and thematic depth has only improved with time. With two studio albums in three years, McMillan hasn't kept his fans waiting for new material for very long, and it's all the better when his second venture proves to be more accomplished than the first. The Medicine had plenty of amazing moments from a musical and worshipful standpoint, but Economy has stepped things up in every corner. Economy is a great investment in profound and awe-inspiring worship, and it's unhesitatingly one of the best albums of the year as a result.

Indie worship artist John Mark McMillan has remained quite the sleeper artist, despite his major label debut last year on Integrity, The Medicine. His independent music spawned the famous song "How He Loves," though the song is more well-known in its cover song form from the likes of David Crowder*Band. However, for those who heard it, The Medicine was a top notch album, and McMillan is primed to release his sophomore Integrity album, Economy. As he did with The Medicine, McMillan delivers a fresh take on worship music, while not strictly serving as a worship artist. While most of Economy does serve to worship our Creator, there's also some times where McMillan focuses on the good things that God's done for us as opposed to directly worshipping the person of the Lord. McMillan mixes pop rock and indie music to create the lush sounds you hear here. Songs like "Murdered Son" remind me of The Ember Days, while the title track has some Switchfoot sensibilities. Also, a little on the odd side, "Sins Are Stones" has a vocal melody that is extremely similar to that of the Christmas carol "O Come Let Us Adore Him" (I'm not complaining, I just thought it was worth sharing). McMillan once again proves to be one of the best artists that Integrity has to offer, with a sound that is very solid and refreshing. Give Economy a listen, admire the fact that there are still worshippers who make good music, and praise God along with the other satisfied listeners. - Scott Fryberger, 10/30/11