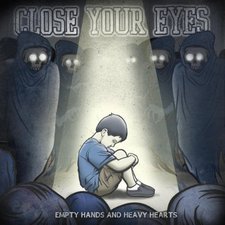 Among the small cadre of Christian bands on Victory Records, Close Your Eyes is arguably the most promising and talented act. Their Victory debut, We Will Overcome, was a nice little foray into melodic hardcore that held a lot of potential and promise for even better things in the future. The future is here now with Empty Hands and Heavy Hearts, and it certainly doesn't disappoint.

Despite being only the second release from a relatively new band, Empty Hands and Heavy Hearts harkens back to an earlier style of hard music that was largely forgotten in the metalcore explosion of the mid 2000's. Thanks to the success of wildly popular metalcore bands like As I Lay Dying, the more traditional hardcore style was largely lost in the shuffle. Close Your Eyes might just bring it back in the Christian market, albeit with a more melodic approach. Instead of the incessant growling and ubiquitous breakdowns of typical metalcore, Close Your Eyes plays a breakneck brand of hardcore, with plenty of rapid, snare-heavy punk beats underneath rousing clean vocals mixed with more energetic screaming. The guitar work focuses less on technicality and more on rhythm and simple chords, giving the vocals more room to shine. And vocalist Shane Raymond definitely deserves his time to shine. His harsh vocals are passionate and intelligible, full of fists-in-the-air energy. His cleans are powerful and solidly melodic, similar to Jeremy Gray of Ivoryline. And as you would expect, there's a liberal dose of gang vocals to round out the mix. The end result is a driving assault of aural energy that shows you don't have to shred or be highly technical to make great hard music, and you most certainly don't need breakdowns every thirty seconds to pump up a crowd.

Lyrically, Empty Hands carries all the raw passion you would expect. The opening track is a straightforward call against greed and injustice, followed by several tracks voicing the struggle of trying to live a righteous Christian life. Fortunately, the band is willing to express the hope that they have in Christ. For example, in standout track "Valleys," Raymond sings that "Even amidst the struggle of finding the man that you have called me to be, Your love reminds me that though I am broken I am still standing. I am still screaming." The lyrics of "Keep The Lights On" are especially poignant, saying "Why do I try so hard to forget the forgiveness that is in your hands, and the mercy in your words? You are calling me to seek You and find rest, and leave behind the emptiness that holds me in the dark." In fact, the album in its entirety carries a genuine quality that is very appealing and refreshing. By excelling in a musical style that isn't currently hitting the top of the charts, the men of Close Your Eyes reflect a sincerity that is then carried over into their lyrics and their message. There is little question that these guys are the real deal, both artistically and in their faith.

If you haven't listened to any hardcore lately, Close Your Eyes might bring you back. Empty Hands and Heavy Hearts is an album that is both serious and sincere, but also extremely fun and enjoyable. This release ensures that Close Your Eyes is not only possibly the best hardcore band in the Christian scene, but one of the top hard bands of any genre coming out of Christian music at this time.

Last February, Victory Records released a slew of Christian market albums, including one by the hardcore/punk group Close Your Eyes. Now, Victory is at it again, with several more for the Christian market, which also includes another new Close Your Eyes album. Entitled Empty Hands and Heavy Hearts, the guys pick up right where they left off with We Will Overcome. Shane Raymond screams most of the time, though it's more of a harsh yelling, along the lines of Tim McIlrath of Rise Against. Musically, speed punk is the name of the game. While the guys do take the pace down for portions of songs, you'll also get lots of snare hits one right after the other combined with quick footwork on the bass drum. At these times, the guitars are left with no choice but to simply keep up. As mentioned, though, they do have their toned down moments. "Paper Thin" actually sounds more like an Anberlin song, with a hint more heaviness. Empty Hands and Heavy Hearts also features traces of hardcore. The bridge of "Wolves" goes into a heavy breakdown, while Raymond screams a little deeper than he does the rest of the time. It's a short section of the song, but they pull it off well. I wouldn't mind if they incorporated more of that into future albums. Close Your Eyes is one of those bands that has talented members that are skilled at what they do, but don't get a lot of recognition and may not make any sort of impact on the music scene. However, I do recommend giving them a listen. We Will Overcome is a good place to start, but I do feel like they've improved with Empty Hands and Heavy Hearts. If you like Rise Against or Take It Back!, this is a band for you. - Scott Fryberger, 10/18/11