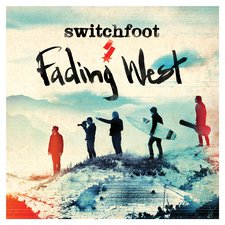 
Switchfoot truly is a force to be reckoned with. Album after album they give listeners quality music but with their latest release, Fading West, they're stirring up the pot. Many who think they know the boys from San Diego will be surprised - pleasantly surprised. Regardless, this ain't the Switchfoot you've heard before.

The album opens with the already introduced, via the Fading West EP, "Love Alone Is Worth the Fight." Its anthemic sound truly establishes a trend for many of the songs found in this release. "Who We Are," also an EP track, follows this up and really keeps the momentum going as it leads into "When We Come Alive." It's a song of perseverance and courage and really introduces a new feel to Switchfoot with creative percussion and a pinch of appropriate auto-tune. Continuing with venturing into the unknown is the aggressive "Say It Like You Mean It." Foreman's call for transparency, as he proclaims "I'm still looking for a correlation between what to say and how you roll," has a punch as he follows it up with, "spit it out, like you mean it!"

Returning to a slightly, lighter feeling is the smooth "Slipping Away." It really feels like a look into the at-home lives of the band as they ponder why they do what they do. This same feeling of "home" is echoed in "Saltwater Heart," as the band reminisces about their love for the ocean, literally and metaphorically. Contrasting with the bright sounds is the dark "BA55," featuring a sick bass line and simple lyrics of being renewed. This track was featured on the EP as well, however its placement within the full-length album feels more strategic and has a lot more impact.

"Let It Out" and "All or Nothing At All" showcase newer sounds for the band as they have elements of heavy synth and more pop driven melodies. Some listeners may be put off by this sound, but after a few listens it may leave folks wanting a little bit more. For the wary loyalist, do not fear; you may be pleasantly surprised.

Concluding the album is the beautiful "Back to the Beginning Again." It really feels like a song paying homage to the feeling of returning to the center and source of fulfillment. It's a sweet melody with wonderfully arranged music and is a great way to fade the album out. By the end of the track, you feel like you just wrapped up a world tour with the guys; it's personable and intimate.

While Fading West isn't the album of albums for Switchfoot, it is most definitely a solid record. Plus, in conjunction with the Fading West film, it is quite possibly one the more intimate offerings from the beloved band. The only negative about the album is the lack of slower songs that many have come to know and love. Regardless, Fading West features some of the best songs the band has ever put out. So at the end of the day, many folks will gladly find themselves fading west with a smile.

- Preview Review date: 11/15/13, Review date: 1/12/14 written by Ryan Barbee of Jesusfreakhideout.com class="coversize" align=right> Early Thoughts...
Consistency is a quality that is very much desired yet not easily obtained. Since the mid-90's Switchfoot has remained a pillar of excellent music. With their latest release, Fading West, the San Diego quintet once again provides the proof in the pudding. However, loyalists should be warned - this ain't the Switchfoot you've heard before. There are some heavy elements of pop music, including dub-step, heavy synth and some auto-tune. Lyrically, it seems that Foreman is playing this one pretty close to the chest as he refers to his love for his west coast home a number of times, granted there seems to be a smooth layer of philosophical depth under the crest of every song. There is no doubt that this album will surprise many fans while also garnering some new listeners; especially with some super radio-friendly tracks like "Let It Out" and "When We Come Alive." On a sadder note, faithful Switchfoot lovers may be taken aback by the absence of slower ballad tracks that might have caught their fancy in previous albums. That doesn't mean an absence of heartfelt songs, but those more mellow lovely tracks that you've grown to treasure will only be found on previous albums. Nonetheless, Fading West is an album for the masses - pre-order it sooner than later. You won't regret it. - Preview Review date: 11/15/13, written by Ryan Barbee of Jesusfreakhideout.com --->

Most bands, regardless of their respectability, are flashes in the pan for the listening world. So when a reputable veteran juggernaut like Switchfoot showcases their career with a documentary like Fading West, a music enthusiast's heart stirs with pride. Upping the ante with a full soundtrack only adds to the warmth, and hence, Fading West culminates as its own chapter of the Switchfoot story, and a notable one at that. While Switchfoot opted to return to Vice Verses producer Neal Avron for this effort, it doesn't necessarily continue in the same alternative rock direction; instead, Fading West's status as a "soundtrack" effectively dictates the creative decisions throughout the project. Jon Foreman's vocals are often filtered through effects or downplayed, and the album's highs and lows are less extreme than usual. These sorts of choices prepare each track well for background use in the film (which is only to the entire project's ultimate benefit), but they catch the ears less without the accompanying visuals. Soundtrack or not, Fading West does illustrate the multi-dimensioned nature of Switchfoot, from the driving nature of "Say It Like You Mean It" to the expertly titled "BA55" to the convincing finality of "Back to the Beginning Again." The personal touches of the bands' children in "Who We Are" and an African choir in "The World You Want" only add to the uniqueness factor, and the album's experience keeps the album of "background music" as dynamic as it can be. Fueled by the hope that comes with musical longevity, Fading West is among the most credible works of its kind, and it's certainly an early favorite of 2014. - Review date: 1/12/14, Roger Gelwicks

With Vice Verses, Switchfoot delivered a near-perfect alt rock experience. Jon Foreman's lyrics have always been the added weight to the musical soundscape that supported them, but if Vice Verses was the musical equivalent of a hearty steak dinner, Fading West is a sugary, tasty bag of Swedish Fish to satisfy the sweet tooth. It's missing the emotional zing of songs like "Vice Verses" and "Where I Belong," but there's still something unmistakably rewarding about this musical journey that celebrates life and love in an infectious way. It may not be the most thought-provoking album in Switchfoot's catalog, but it is their most pop-driven venture and possibly their most accessible to date. - 1/13/14, John DiBiase of Jesusfreakhideout.com

Switchfoot continues their streak of terrific albums with this soundtrack to their surfing travel film of the same name. Filled with epic songs ("Love Alone Is Worth The Fight" is easily one of the band's top five songs) and thought-provoking lyrics ("The World You Want" being a highlight in this area), Fading West is a great chapter in Switchfoot's long musical novel. - 1/13/14, Alex Caldwell of Jesusfreakhideout.com

Don't let the poppy sheen and atmospheric soundscapes fool you; Fading West is without doubt a departure from Switchfoot's established sound (particularly the "soundtrack" feel it not-surprisingly exhibits), but songs like "The World You Want," "Say It Like You Mean It," and personal favorite "Slipping Away" exhibit all that we know and love about the band. It's without a doubt the most intimate album of Switchfoot's career, and quickly rising on my personal list of favorites. - 1/22/14, Mark Rice of Jesusfreakhideout.com