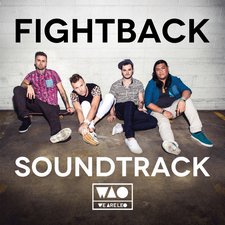 We Are Leo
Fightback Soundtrack

We Are Leo was first introduced to the music scene with an eight song EP in 2011 called Hello, released through Ben Kasica's indie label, Skies Fall. One year later, the band re-released the album as Hello Again, adding three remixes to the original tracklist. Now on Dream Records, the four-piece band has followed up on their debut with an even more ambitious project, entitled Fightback Soundtrack. While this project may not be particularly innovative, it is filled with a lot of passion and joy. In fact, the cheerfulness and life that radiates from this album is one of the things that stands out about the band, along with their focus on Christ and youthful appeal.

Most of the album is comprised of energetic electronic-based pop music, but the band throws several stylistic curveballs to keep things fresh and interesting. The synthpop laced "Yours4Sure" kicks off the album on a high note with a danceable beat, bright synthesizers, and a guitar solo. The funky title track features a lively disco flavor as lead vocalist David Duffield and guests Rapture Ruckus tag team singing duties to embolden listeners to chase their dreams. "Epic" is an EDM track that musically works well as a fun party song, but lyrically falls flat. Album highlight "You're The Best Thing" is a festive dance-pop tune that expresses the joy and security in first coming to Christ.

There are also a few songs that balance out the musical sugar rush. "Phoenix" uses a tame piano during the verses and erupts into an anthemic pop/rock song in the chorus. "Yesterday's Gone" is a mid-tempo CCM song with an optimistic message to press forward in spite of past pain: "Brushing off ashes and tears that I've cried / Not draggin' it with me/ I'll leave it behind /His mercy is new every morning." The synth driven songs "Amnesia" and "Northern Lights" slow things down at the right moments on the album, highlighting the band's simple metaphorical songwriting and musical talent.

There aren't any particularly weak songs here, but a few of them are not as memorable as the rest, like the synthpop tune "Fire Inside You" and the pop/rock "Diamonds In The Dark." Perhaps the biggest drawback of this album is the lyrics, which contain a number of clichés. Fortunately, the positives of the album--such as the production value, varying styles, big hooks--and skillful musicianship, help make up for these shortcomings. When all is said and done, Fightback Soundtrack is an enjoyable and encouraging listen and recommendable for youth and fans of the synthpop genre.