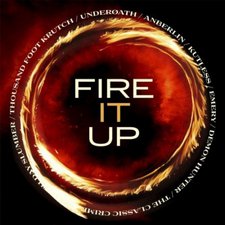 Various Artists
Fire It Up

This summer, Tooth and Nail Records is once again releasing compilation projects showcasing the best of their artist lineup, past and present. This particular release attempts to highlight some of the heavier music they have put out over the years, with mixed results.

Fire It Up starts properly with the title track by Thousand Foot Krutch, readying the listener for an onslaught of headbanging rockers. Unfortunately, the album goes next to a largely forgettable track by The Letter Black and then two tracks that consist mostly of just screaming vocals, Demon Hunter and Underoath. It was nice to see the label reach back into the catalogues of the respective artists, but the songs seem out of place with the rest of the release, due to the large percentage of screaming vocals.

After these questionable additions, the album gets back on track with "Treason," a cut off of Kutless' Sea of Faces, my personal favorite of theirs. Following that are more forgettable songs, "Awake" by Seventh Day Slumber, and "Guilty" by generic rock band Since October. It's not to say that they're bad songs, just largely generic and don't really stand apart from others in the genre. Falling Up's gem "Broken Heart" became a rose between two thorns, and is a highlight of the album.

Emery then takes over to lead into a redemption of the last third of the album preceding tracks by Anberlin, The Classic Crime, and the always reliable Project 86. It was a bit odd to hear one of Anberlin's less intense songs put before "The Spy Hunter"'s kick-your-teeth-in intensity; perhaps something like "The Feel Good Drag" or "Never Take Friendship Personal" would've been more genre appropriate.

Overall, this compilation feels uneven and uninspired. There are a handful of good, even great, songs presented, but they are bogged down by the cookie-cutter rock that penetrates at points in the record. As a compilation for unfamiliar fans, you could do better by grabbing some of the older offerings. As for longtime listeners, steer clear.

I have to agree that this compilation is a little uneven, and yeah, it's not the best line up of songs either. However, for an album called Fire It Up, I think I would prefer more screaming and less Kutless and Falling Up. On top of that, compilations are pretty much useless these days, especially given that the vast majority of these songs have been offered as free MP3 downloads at some point or another. You can also add to that the fact that the songs, other than TFK, The Letter Black and Since October, are all older songs that Tooth & Nail fans have all heard a thousand times. And if Fire It Up was meant to appeal to non-T&N fans, then they probably should've pulled out some of the newer stuff, maybe some non-singles, to showcase what they have to offer now, instead of showcasing some of the last great bands that they had. Quality-wise, it's a decent tracklist, but overall, an unnecessary one. - 9/30/11, Scott Fryberger of Jesusfreakhideout.com