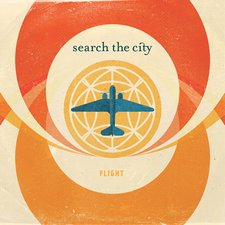 It's been over five years since we last heard from Detroit alternative rockers Search The City and I have been among the crowd of patient fans, painfully awaiting the follow-up of the amazing A Fire So Big The Heavens Can See It. At long last, it has finally arrived. Flight has been released independently and can currently be purchased via the band's website, as well as iTunes and Amazon. So, what will be done after the five year silence and some big shoes to fill again?

"My Secrets Have Secrets Too" starts off with an acapella intro which totally makes sense with STC's unique pop rock mantra, then jumps into an album full of nice tunes chock full of emo-laced one liners. "Syndicated Reality," "Get A Grip," and "Watch The Stars Fall" are standard for the band; catchy and full of solidly paced drums and guitars that go well with Travis' vocals (who sounds very close to former front man Josh, making for a smooth transition). Certain tracks stand out with their intelligently written lyrics. In "Whispers And Memories," the listener is taunted with "I'm haunting this place with what's left of me" and "Rewrite The Ending" says "You set your friends on fire and let accomplishments slip under the wire." They're both reminiscent of those killer verses that I fell in love with back in 2008. The downloadable album is full of pop rocking tunes and a few softer sides to make for a rather complete offering with something for just about every listener.

But there is a downside, however. "Heartstrings" seems a little sloppy and "Young Hearts" screams 'filler track' and probably could have been left off the album and not have been missed. That being said, Flight is still a solid album and songs like "Light The Fire" with the catchy tunes and clever words like "keep your speeches, we're done with your reasons tonight" make "Flight" an album that fans of STC will definitely enjoy. Maybe they just set that bar too high five years ago, but it's hard to fault them for making only a good - rather than stellar - album this time around. If you enjoyed A Fire So Big... then you are going to enjoy Flight.

If you like alternative rock with positive vibes, you will love Search The City's Flight. The record opens with the a capella track "My Secrets Have Secrets Too." The arrangement of this track is wonderful, and leads an album full of positive, catchy tunes, which is well worth spending time with. The tracks following will not disappoint long expectant fans. They bring back their unique style of rock, and all the poetry that comes with it. "Heartstrings" calls back to memory when Search The City first floored rock fans, and "Memories" is easily one of the best new tracks found here. Back in 2008, Search the City did a couple things exceptionally well. First, they wrote songs with clever, thought-provoking lyrics. Second, they wrote music that is upbeat and captivating. "Memories" represents both of these qualities very well, utilizing a cheerful drum track, harmonic background vocals, and showcasing Alan Reitman's excellent vocal abilities. "Runaways" offers an interesting change of pace; the song has an interesting dynamic of speed. It starts as a slow ballad, but quickly builds into a fast chorus, and then it drops back to the slower pace. This not only demonstrates a unique sense of timing, but also highlights what Alan can do. A couple songs come up short, however. "Young Hearts" doesn't feel like it belongs with the rest of the record, and "One Last Lullaby" doesn't offer the unique wit in lyrical composition that has become the norm for these musicians. The album as a whole offers the excellence expected from Search The City. Flight concludes with "Watch the Stars Fall." This song is a sentimental and strangely happy song, and an excellent conclusion to the record. One upbeat song to another, Search the City understands their style and they master it on Flight. - Aaron Alford, 9/30/13