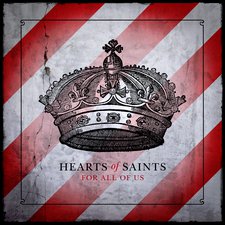 Hearts of Saints
For All of Us

As foreign as it may seem here in the era of file sharing, one-click music downloads and instantaneous access to free music from just about every currently-breathing independent artist, laying hold of one's favorite music wasn't nearly always this easy. Back in the pre-MTV era, youngsters in the hard-rock-loving masses would spend the average Saturday afternoon rifling through wallets, car consoles and spare cash drawers to scrounge up enough money for that long-anticipated trip to the local record shop, where they would faithfully comb the shelves for the latest album from that hot new artist, hand over their hard-earned dollars to the store clerk, tuck the newfound treasure under their arms, and race home to place that delicious slice of newly-pressed vinyl on the ever-trusty turntable. Ensconced in the safety of their rooms, these head-banging connoisseurs would toss on Koss headphones, grab the nearest tennis racquet or other guitar-shaped object, step over to the full-length mirror and "play" along with every note as dreams of one day stepping into their heroes' star-studded shoes filled their youthfully optimistic minds.

Front man Craig Felker and his fellow Hearts of Saints members are too young to actually have first-hand recollection of that blessed era when the average rock band held stock in Maybelline or Aqua Net and blindingly-fast guitar solos were all but mandatory for any song that wasn't a ballad. That being said, their latest effort - billed as a half rock and half worship project - seems like nothing so much as a conscious rebuttal to the current state of things where dynamic range is a near-forgotten quantity and far too many artists seem content to construct tepid, cookie-cutter compositions with one eye trained on Christian Hit Radio at all times. After a brief minute-long intro, Felker and his bandmates leap from the starting gate with "Birth of a Legacy," a commanding garage rock-inclined cut that serves fair notice to all with ears to hear that the band holds the rock music idiom in the highest of regard. The also bracing "Flash" is a likewise powerful, soaring and melodic proposition. The verses and choruses of "Wait" fall together in a slippery, almost off-balance fashion that, against all odds, ends up working magnificently. And, lest the listener think that the band is all spark and speed, "You're Alive" proves beyond a shadow of a doubt that guitarist Jesse Grisham realizes the often-overlooked value of grace and restraint when it comes to constructing a great pop number.

Listeners who find themselves leaning a bit more toward the less bracing end of the spectrum will be pleased to know that the worship portion of the release features its own share of thoroughly winning material. With its copious reverb and infectiously twangy guitar accents, "Everlasting" begins in hushed and reverent tones before swelling to a wondrous all-out chorus and then, finally, migrating gracefully back to its original quiet textures. The meaty, heavily compressed guitars and hook-filled groove of "Out of the Dark" hark back to that which was so absolutely transcendent about the music written during the then-nascent modern worship movement of the late '80s and early '90s. In a perfect world, the shimmering fret work, terse synth-based orchestral flourishes and airtight melody that join together to create "Empires" would render the standout track a shoe-in for pop/rock song of the year. And the sublimely unaffected simplicity of "Your Great Love" acts as a virtual exclamation point to For All of Us's already impressive musical statement.

Enthusiastic and engaging as it is, the band's sophomore outing isn't quite a perfect proposition. A handful of its cuts still manage to wade into those same overly homogenous, plain-vanilla waters that now seem home to just about every artist currently gunning for a slot in the Christian pop Top 20. But, even with these occasional lapses taken into account, the latest record is still a hands-down winner that hits the mark far more times than it sails wide of it. More importantly, though, it represents a gigantic leap in quality when compared to the less than stellar freshman effort - making that album seem more like a mere warm-up for what would follow than the all-too-familiar prelude to the dreaded sophomore slump. Forging their way through a densely-populated wood of like-sounding artists, the Hearts of Saints cooperative has dared, this time around, to take the road less traveled by. And that has, indeed, made all the difference.