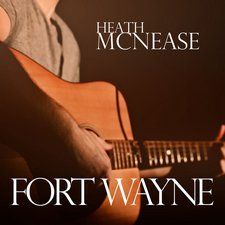 Heath McNease has made a name for himself over the last several years by releasing an unreasonable amount of albums. Between his singer/songwriter roots and hip-hop experimentations, one can seldom blink without a new project appearing on the horizon. As such, he has developed a larger discography than many longtime musicians and bands. In spite of this, however, McNease doesn't trade in quality for quantity.

What McNease brings to the table this time is a full-blown concept project, consisting not just of an album, but a film. Fort Wayne (film) is a forty minute self-described comedy/drama with McNease writing, directing, producing, and starring. This album ties in with the film, though one would have no idea that the music doesn't stand alone unless otherwise informed.

Fort Wayne (Songs Inspired by the Film) opens up with "Shorter Days," one of the album's better tracks. Its fast-paced guitar work gives the song a folkish/Americana vibe, which is also carried into the next song, "Coleridge." This, however, marks the zone where more "interesting" elements begin appearing. Electronic beats arrive on the scene starting here, and a keyboard is added to the next track as well. Sounds which don't traditionally "go together" are strung along in an oddly naturalized way. It's not until the listener pays careful attention that the realization of what McNease's handiwork entails sets in.

"Eastbound 94" is a beautifully bizarre piece of work, and "Why Feel?" serves as one of Fort Wayne's best songs. "Codes" showcases quite a bit of piano work, which doesn't really set itself apart until the breakdown/closing of the song, where it takes on a rather jaunty atmosphere. The next several tracks return to the folk/Americana realm and are just so-so, with "Starry Eyes" being the strongest of these.

The semi-final track, "ee" (a song named after E.E. Cummings), borrows heavily from poetry by its namesake: "You have played, I think / Broke the toys you were fondest of / And your heart grows tired / Tired of things that break." It's a great piece which lends well to music, and sets itself apart as one of Fort Wayne's strongest offerings. The main portion of the album ends with the title track, "Fort Wayne." It's a decent song, but falls short of its positioning.

Personally, I most enjoyed the five Noisetrade acoustic tracks, finding them to be similar in flavor to The Gloomcatcher and Josh Garrels. These "bonus tracks" boosted the album's rating for me. The best of these is "Silver Glass," which borrows concepts from J.R.R. Tolkien's writings: "I'm so glad that you're here with me / At the end of all things / I will not be afraid / Though skies have turned to gray or rain fall / There's still good left inside this world / And it's still worth fighting for."

The album is unique. In this day and age, such a characteristic is often worth more than an album's actual quality. Thankfully, though, the latter isn't lacking. Ultimately, McNease has presented his fans with yet another solid offering. Fort Wayne (Songs Inspired by the Film) should be considered a delicacy, and many listeners will likely find it to be an acquired taste. More than one play through will probably be necessary to fully grasp the identity of the album. Although this might not be McNease's best work, it's certainly up to par and the train doesn't show any signs of slowing down.