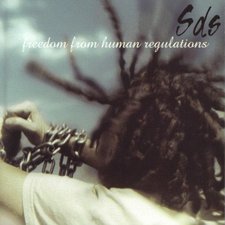 
In 2001, then-new Christian grunge-rock act Seventh Day Slumber released their second studio album, Freedom From Human Regulations via MercyStreet Records. This album is largely toned down from their Afina Records debut, Matthew Twenty Five, but still has a few rocking tracks in there. The departure of founding members Evan Weatherford (guitar) and Adam Witte (drums), and the introduction of new guitarist Jeremy Holderfield and drummer Rusty Clutts on this release were a likely cause for the change in sound. This album is also not available online, with the only way of hearing this record being by purchasing a physical copy, although many songs were redone for the band's next effort, Picking Up The Pieces, and can be heard remastered there.

The album starts with "Candy," a track telling of God pulling you out of hard times and being introduced to His love, which is nothing new in the Christian music scene by any stretch of the imagination, but this band pulls it off quite well lyrically. ("So many nights wasted poisoning myself/I guess I just hated the emptiness I felt/To be accepted, you gotta look like they do/But You held Your hand out, You took me just as I am") In terms of guitar work, the tone seems to be a bit flat here, for lack of better words, paired with simplistic riffs, which is a large departure from the very creative, at times complex, and very Pearl Jam-esque guitar work of their previous record. The next track, "My Struggle," is an improvement from its preceding track. The lyrical depth increases, with lines such as "It must be some mistake/Cause I'm not worth the price You paid/With every passing hour/I convince myself that You saw something in me." The guitar work is also improved here, although a very repetitive instrumental section appears in the middle of the song with the same guitar riff being played many times over. But all in all, this comes in as one of the better tracks on the album. Then we get the song "Out Of Time," with some very nice guitar work from Holderfield, this being our first real taste of his talent. This song addresses problems in the world such as oppression, war, etc., and is definitely one of the highlights of the album.

The album then goes on to the track, "Something," a song very similar to the first two. The same flat guitar tone and simplistic riffs return, and this may be the weakest song lyrically on the record, with both verses being almost identical, and the chorus simply saying, "I need something/I need something more/I need You." We then get an almost entirely acoustic song, "Conflict," which is one of the best on the album. It has an interesting song structure, not just your typical verse-chorus-verse-chorus-bridge-chorus structure, and flows very nicely. This is also where we see some of the better songwriting on the album. We then get one of the harder tracks on the album, the more grunge-centered "Daddy," which is another song where we hear the talent of Jeremy Holderfield in its fullest. An interesting track with a funk vibe in the form of "Old Mercy" follows, with arguably some of Seventh Day Slumber's best songwriting of their 20+ year career. Lines such as "It's unbelievable to me how you can see all that's wrong with another/And still be blind to the sin you make excuses for/Do this and don't do that 'cause it's wrong/But you've been sitting here gossiping all day long/And that's ok?" really showcase the lyrical capabilities and ideas this band can formulate. Holderfield's 'Wah pedal' has a large presence in the song, including its use in a nice guitar solo between the second and third choruses.

We're then treated to a true grunge-rock song, very reminiscent of something Grammatrain may have produced in their mid-1990s carrer, entitled "Untold Stories," a song later redone and renamed "Innocence," and the only song from this album to remain on the band's live set lists throughout the period between 2001 and 2010. The song tackles a topic not seen very much in the Christian music scene, which is innocence being lost and needing God to restore it, so it's nice to see something fresh here. The next track continues this streak of lesser-seen themes, "More." This song has some very nice blues-style guitar licks from Holderfield, and talks about people being more than what they look like and more than who they've been in the past. The final song on the record, but not the final track, is "Here With You," an acoustic song written from the perspective of Jesus on how people turn their backs on Him, yet His love for us never fails, regardless. The album closes on a track with lead singer Joseph Rojas telling his incredible testimony, which if you have not heard, I highly recommend doing so.

And, of course, the only band member not yet mentioned needs to be brought to light, which is bassist Joshua Schwartz. Seventh Day Slumber's previous effort, Matthew Twenty Five, had some incredible bass work from Schwartz, and this album, while not as complex, still offers some decent basslines throughout. So, all in all, while Freedom From Human Regulations may be Seventh Day Slumber's weakest album, it's still worth a listen. And because of how hard this album is to find, if you have the opportunity, I highly recommend picking this album up. For anyone new to the band, I would not recommend this record, but to any long-time fan of the band or any fan of post-grunge, this album is for you.