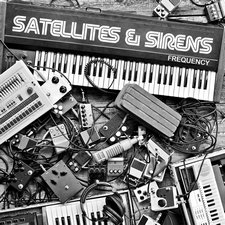 A synth-driven rock band isn't something that you hear from everyday, but that's exactly what you're going to get when you pop in Frequency from Satellites & Sirens. This is the sophomore release from the band hailing from Nashville, TN and their rock eletronica music sounds nothing like what one might expect out of a band from the city known mostly for blues and country tunes.

The album opens with "Run Away" and "Frequency;" both are exactly what you would expect from synth electronic pop driven rock music. Both songs highlight that rather unique sound, but fail to deliver anything too deep when it comes to the lyrical content. Some of the following songs will carry a movement in pace musically (both faster and slower), while other tracks have more weight in terms of content, touching on subjects like brokenness and our wonderful Savior. However, for the most part, it's difficult to tell one song from the next as there aren't many striking differences musically from track to track. Each song carries the same flow and structure, and there really are no standout listings on the album.

Overall, many people will enjoy the music because of its diversity in blending pop/rock with that mentioned electronica sound. However, with the lack of depth on many of the tracks (even though the focus is mostly positive and Christ-centered) some will be left wanting more. It won't be an album to change the face of pop music and you probably won't be missing out if you skip out on buying it, but if you enjoy a touch of uniqueness in your radioplay tunes, then you'll likely enjoy this synth infused album.

Satellites & Sirens was one of the more promising new artists from Word Records last year; their self-titled debut was undeveloped and a bit shoddy in its execution, but it nonetheless indicated an accomplished sound in the making that would only improve with time. After the band parted ways with their label, however, another album seemed far less likely. But with the band's decision to produce new music independently, listeners indeed get the follow-up entitled Frequency; perhaps going indie was their key to enhancing their approach. While their debut suffered by attempting to combine an alternative electronic pop sound with Christian radio-friendliness, Frequency implements a far better-realized sound that mostly forsakes the latter half of that hybrid. S&S's musicianship has clearly stepped it up, and an effective guitar/synth mix really captures their art best. Even Geoff Hunker's vocals feel more polished and professional, which was another aspect of their debut that generally lacked. "Run Away," "Make A Mess," "Feel Alive," and "Tell It" are all able to communicate a meaningful message while keeping the backing music fun and lively, and "Ready To Save" and "Run To You" serve as the record's two lone ballads. While Satellites & Sirens can still make some strides, such as varying their twelve-song-set just a tad more and making their songs more distinguishable, Frequency is an enormous step in the right direction for the quartet. With this rate of improvement, their third go-around could be quite the project. - Review date: 11/20/11, written by Roger Gelwicks of Jesusfreakhideout.com