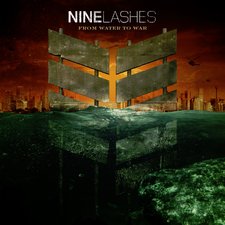 Nine Lashes
From Water to War

Nine Lashes broke into the mainstream of Christian rock in early 2012 with their Tooth and Nail debut, World We View. The outing offered mostly straightforward modern rock, but also offered hope of growth and a slight break of the monotony found in the genre. Nearly 2 years, to the date, later, these Alabama boys find themselves releasing their sophomore effort with From Water to War. This release honestly provided a surprising course of progression and change. What some may see as a slight departure in sound, others may see as artistic integrity and growth. The guys in Nine Lashes approached this project from a sense of doing what they like and featuring some of their member's favorite sounds. Where World We View was basic modern rock, From Water to War is a mixture of modern rock, a little "Imagine Dragons" flavor, and straight-up pop. The group has musical tastes ranging from Linkin Park (early and current), Imagine Dragons -- dare I say Katy Perry, -- and so many more. It's all pretty evident when you listen to this record, whose title circles around baptism and the spiritual war that ensues afterward.

The album opens with the modern rock sound fans of Nine Lashes have come to expect. "Never Back Down" and lead single "Break the World" bring chunky guitars and catchy hooks coupled with some electronic elements, a-la Linkin Park, courtesy of co-producer Aaron Sprinkle. The first few minutes preview a band who seems focused, and singer Jeremy Dunn's switch from softer vocals to a much more aggressive growl (at times from line to line) sounds nice. The first shock for those not prepared is "Where I Belong." You keep waiting for the almost sugary pop sound of the intro to fade, but it just doesn't. The pop sound eventually slows a bit for a piano section before going into full-on Night at the Roxbury mode. You do remember I said Katy Perry, right? Sadly, the song just feels too out of place for a rock record. "Lights We Burn" starts with a slight pop vibe, but opens nicely in the chorus with a sound more akin to someone like Three Days Grace. While you expect a ballad or two on an album like this, "Surrender" isn't quite the assumed format. The track walks a fine line between rock ballad and AC hit. Dunn sings out, "I am tired I am broken; unsure at every turn. Though You told me where to go I've lost the road," in the first part of verse one and follows rather fervently in the chorus, "Cause I've become a desperate soul when Your unfailing love feels far. I need to know You want won't let go through it all. You can have my broken hear; everything that's left in me and I will surrender" While some may claim it's a song to simply garner radio play, I would argue that those types of songs typically feel more generic and not this honest. "Surrender" is an album favorite.

"Fear and Shadows" has a definite older Linkin Park vibe and is one of a few songs discussing "light and dark" thematically. While it lyrically comes off as another honest endeavor, the "oh-oh-oh" repeated after the chorus feels too similar to that in "Break the World." The shame of it is that it actually fits much better into this tune. "Die in the Dark" kicks up the intensity and brings the sound I'd truly been waiting to hear. This number is heavier, riff-driven rock and is more comparable to something like "Our Darkest Day" from World We View, especially in the breakdown. The heaviest song on the album is immediately followed by another upbeat rocker in "Light it Up." While Sprinkle was brought it for his electro-pop expertise, fellow co-producer Jasen Rauch was brought in to help beef up these hard rockers. The final head-scratcher on this outing is "Love Me Now." The verse has a great groove you'll find yourself falling into quickly, but the pre-chorus goes in a different direction. When you think the song is going to continue building, it drops the groove and had Jeremy singing falsetto before going more towards the Imagine Dragons side of things for the chorus (*A side note: By "Imagine Dragons," I'm mostly referring to that electronic distortion sound they use at times. Linkin Park has also been using that sound as well as others. It is not meant as a direct comparison to Imagine Dragons). Though it's not what most listeners will expect, it's always refreshing for music to catch you off guard. This one is a closet favorite for me. The record closes on "Cover Your Own." This tune mixes the ballad and pop sounds from earlier. In the grand scheme of things, it becomes one of the weaker tracks because, like "Where I Belong," it just feels a little out of place. The album could've benefitted from a different closing track.

Nine Lashes have crafted something very interesting this time around. Fans solely of harder rock music may find more disappointment than satisfaction, but those with broader musical tastes may be truly surprised. While I'm personally not a big pop music fan, I give them credit for making the record THEY wanted. Tooth and Nail seems to support this band wholeheartedly and it shows by the type of record they have released. The guys stepped out on a limb deciding that making music that represented each member personally was more important than deciding on whether the music they made would gain or alienate fans. For those interested in rock, "Die in the Dark" is probably their heaviest song to date. For those who like rock but love diversity, "Where I Belong" and "Love Me Now" definitely provide that. It will be fascinating to see how this album is received, but the musical depth shows improvement from their debut. I'm curious to see what musical side of the band has the strongest showing on future releases.

Starting with the 2009 indie release of Escape, Nine Lashes has developed a sturdy reputation for bringing a solid and gritty sound to their Christ-centered lyrics. Ever-forward with their faith, the band has grown in popularity in not only the Christian, but also the secular world. The band's third album, From Water to War, maintains the themes and the sound that fans have come to expect, for better or worse. The softer songs, like "Surrender," are artfully crafted, and strangely enough, reminiscent of artists such as Downhere. This demonstrates the band's versatility and maturity, without disposing of their roots. "Die in the Dark," one of the strongest offerings, shows how well the band has developed their signature sound. It's gritty, raw, and yet it flows with the blood of quality production. The closing piece, "Cover Your Own," is well-controlled and professional, showing the band's progressive musicianship. As opposed to previous releases, Nine Lashes has turned up the electronic element, which doesn't really add or take away from the sound. From Water to War is well-constructed, minus a few minor bumps. The album is a little on the short side, and several of the songs sound too similar. The tracks with softer or harder elements stand out, but the middle ground is lost in between. (A guest appearance or two wouldn't have hurt, either.) Nine Lashes is running out of road concerning their current sound; if their next album fails to break them out of their self-made box, they'll likely become stagnant, retaining only their most devoted fans. Overall, From Water to War is a strong album, but if you didn't like Nine Lashes before, you may want to pass this one by. - Review date: 1/12/14, David Craft