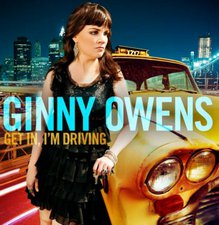 Ginny Owens
Get In, I'm Driving

Here is what you might want to know about Ginny Owens and about her latest album, Get In I'm Driving, if you don't already know: The most unique aspect of Owens as an artist is that she has been legally blind since age two, but, despite her handicap, she has already collected a handful of Dove awards. Now, the contemporary pop singer is back with her first original studio album in five years.

Get In I'm Driving offers eleven songs that range from upbeat pop numbers, to slower R&B tunes, and even slower ballads. "Before You Fly" and "Better Off" are bouncy piano-driven pop songs that act as successful breaks between the slower tempos of other tracks. Those other songs are hit and miss starting with the title track which is not nearly ambitious or engaging enough. However, tracks like "Rain" and "Joined At The Heart" have more than enough emotional buildup to win over her target demographic, although the final track, "The Song," does not. The lazy "Better That Way" is an enjoyable jazzy song that probably best showcases Owens' strong vocal talent. The rest of the album is pretty uneventful, except for the piano-influenced "Higher Ground" that has a distinct melancholy tone.

Get In I'm Driving isn't a worship album and it's not even an album full of stories either; the songwriting on the project reflects the lessons that Owens has learned from her own and other's experiences and the advice she has to offer because of it. Whether she is singing about turbulent times in "Rain" (a song specifically about the ups and downs of relationships), or about simply laying down the burdens we all have ("Lay It Down"), Owens usually accompanies them with a spiritual perspective. However, some of the lyrics seem a little trite at times, including "Daughter Of Destiny."

Ginny's Owen's first release in five years has already been met with much critical acclaim, and it's easy to see the appeal in the the emotion she puts into the album's music along with the style of songwriting. For a contemporary pop album, there a are a few noticeable songs that are made for radio, but the rest are generally geared for a quiet afternoon. Although Get In I'm Driving isn't a groundbreaking or particularly flashy project, her fans hungry for new music will no doubt be satisfied with Ginny's latest effort.