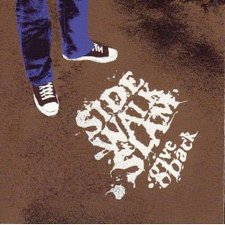 Side Walk Slam
Give Back

The rock / alternative band Run Kid Run was derived from the punk rock band, Side Walk Slam. The band is made up of three of the existing Run Kid Run band members. When listening to Give Back, I had trouble distinguishing the beginning and end of each song because of how similar each one sounds. Each track contains very few lyrics, which are then repeated to make the song about two minutes long each.

The title of the album is Give Back, although when I listened to the lyrics, I found that most of the songs were depressing stories with the appearance of two moderately "happy" tracks. The record starts off with the song "Another Tragedy," which you would assume would be a downer to start the album off with, but the lyrics aren't as deep as you might think. The lyrics in "Another Tragedy" have meaning behind them, but the way Side Walk Slam uses them doesn't fully let the listener grasp what is actually going on in the intended message.

So if you're just looking to listen to a good pop punk rock band, then Side Walk Slam has exactly what you're looking for. I thought the vocals were a little shaky but the instrumentation really made up for what the vocals lacked. Fans of Run Kid Run should especially check out Give Back!