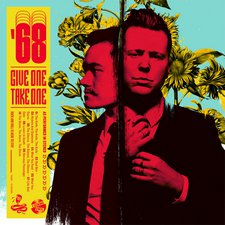 68
Give One Take One


Last year, '68 took the opportunity to remind us that they're still around. Despite the replacement of original drummer, Michael McClellan, with Nikko Yamada, the Love Is Ain't Dead EP offered another (smaller) helping of what fans have come to expect without missing a beat. And it was the perfect prelude to the duo's third full-length album, Give One, Take One.

'68 brings with them a very strong opening set of songs. "The Knife, The Knife, The Knife" was no doubt written with a live audience in mind, which is an exciting thought for those who have seen their incredible live show. Lead single "Bad Bite" follows, and it's easily one of the best songs they've ever written. It's got the Josh Scogin personality you come for ("oh honey you just love me for my riffs / we've got plenty of time for death in a later-on episode / but for now it's just time to dance"), excellent drums, killer guitar riffs, and it's super engaging. The album effortlessly flows into the fantastic rocker, "Nickels and Diamonds," then takes a moment to give the listener a breather. Though I find more enjoyment from '68 when they're revved up and highly energetic, "What You Feed" and "What You Starve" do a good job showing off their blues rock influences. The songs aren't slow, quiet, or lacking energy, by any means, but are a bit more dialed back than the songs before it.

"The Silence, The Silence, The Silence" is a shorter interlude track with music that sounds like it could have been co-written by MuteMath and The Black Keys. "Life and Debt" follows with the closest thing to a ballad the duo has written thus far. As the song crescendos and then fades out, it feeds quickly into a heavy, crunchy guitar riff, which begins another album highlight, "Lovers in Death." The song is an unpredictable roller coaster that hits you with an intense chorus right when you least expect it. If it's not the best song on the album, it's surely a strong contender. Going from the most erratic to possibly the most melodic song this go-around, "Nervous Passenger" is a decent follow-up track, featuring a lot more actual singing than Scogin's usual speaking/screaming. The album caps off with "The Storm, The Storm, The Storm." This final number is almost like a combination of the closing tracks from the last album, Two Parts Viper, and that of The Chariot's final album, One Wing. It's a longer track that takes its time to build up, and it also features sound bites from various sources. It's an enjoyable listen and a great way to end the record.

It would be reasonable to expect the loss of Michael McClellan to be a death blow to '68, given the duo's undeniable chemistry together. But Give One Take One is proof that the project is still alive and well and doing what it does best. There are several songs here that I can't wait to see performed live; here's hoping we get that chance this year. But if not, at least we have new music to tide us over.

I absolutely fell in love with 68's 2017 release, Two Parts Viper, as it finished at number six on my top ten albums that year. Again in 2020, '68 landed on my top songs list with their cover of "Rock On." Scogin is back at it again as Give One Take One is another great effort. It doesn't have QUITE the edge of Two Parts Viper, but it's pretty fantastic nonetheless. There's a lot to like on this release -- especially with songs like "Bad Bite" (which also has a super cool video) on the track listing. I've heard it said that '68 just does one thing, however, when they do just one thing this well, do they really need to do anything else? - 4/8/21 Michael Weaver