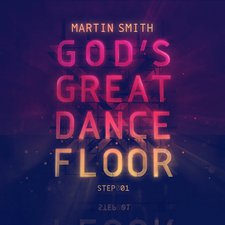 It was a sad day when the worship pioneers Delirious? played their last notes together back in 2009, but the members have been anything but quiet since then. Most notably, Stu G and Jon Thatcher went on to form half of the worship group One Sonic Society (though Thatcher later left the group), and former frontman Martin Smith has been heavily involved with his CompassionArt charity. But it was only a matter of time before Smith started making music again, and during the past year, he's independently released four EPs of new music (the God's Great Dance Floor "movements"). And now Smith is compiling these EPs into two albums to be released in 2013. The first of these albums, appropriately titled God's Great Dance Floor, Step 01, features eight of these songs (which forms the entirety of the first two EPs) plus two previously unreleased ones.

Now, naturally, one potential problem in creating a project compiled from prior releases is that many dedicated fans might already have these songs. Not only that, but three of the songs on this album have already been covered (or reimagined) by some very well-known artists. Chris Tomlin, and subsequently Passion, adapted Smith's "Back To The Start" into the song more commonly known by the name "God's Great Dance Floor;" the newly-refurbished Audio Adrenaline covered "Fire Never Sleeps" on their album Kings & Queens; and Jesus Culture featured "Waiting Here For You" and "Fire Never Sleeps" on their latest album. So in many ways, the thrill of having "new" material from Martin Smith is, in fact, slightly unwarranted. That said, I suspect that the vast majority of otherwise-anticipating fans still do not have these songs, which makes it handy to have them in one compilation, and the two new songs are a bonus also.

So now that that aspect is out of the way, how is the album itself? In short, it's solid. One thing Delirious? never sacrificed during their time together was artistic integrity for the sake of accessibility, and Smith keeps that up here. And another thing I'm happy to report is that Smith isn't simply trying to recreate Delirious?'s sound, but he is owning it. Of course, being in the band for 17 years will certainly make some moments reminiscent of his time with Delirious? (most notably "Fire Never Sleeps" and "You Carry Me"), but then come along songs like "Jesus of Nazareth" and "Awake My Soul" that are vastly different from anything we have previously heard from his days in the band. In particular, "Jesus of Nazareth," one of the two new songs, will catch many off guard with its whiplash-like beat and overall bluegrass/country feel, but I can only consider it a highlight and one of the most refreshing worship songs I've heard on a while. "Tear Drop" is another highlight, a tender ballad certain to be played in many an intimate time of worship. "Soldiers" is one of those rare worship anthems that can be sung in any worship service, yet still has legitimate substance and meaning in the lyrics. And "Back To The Start," which is essentially a six-and-a-half minute crescendo, I feel, is much more moving and artistically sound than Tomlin's version. Certainly, some of the songs I can only consider to be on the weaker side ("You Carry Me" and "Safe In Your Arms" in particular), but I really cannot say that any one of them is a misfire.

The reappearance of Martin Smith back in the music scene is very welcome, and God's Great Dance Floor, Step 01 is a great first step into the solo realm. Certainly, fans of Delirious? will want to pick this one up, as well as worship music fans in general. Most of these songs I could easily see in worship services around the world, but thankfully not at the expense of dumbing the music down to the point of simple mediocrity. Indeed, the only real issue with the album is that most of these songs have already been released, but that matters little to the majority that don't already have them. So all I can say is pick it up and enjoy!

If you think that this is a Delirious revival, you're not too far off. While Martin Smith's vocals are naturally going to remind listeners of that sweet nostalgia, his new album is something considerably different. Obviously, this major figure of modern worship music is not quite done with his mission on God's Great Dance Floor.

Songs like "Fire Never Sleeps" and "Back to the Start" feature very modern sounds with catchy choruses and layered music. Whilst not readily available for corporate Sunday gatherings, they do give listeners a creative look at the beauty of God. The true standout track, however, is "Waiting Here for You." Although this song is not technically a new one, its arrangement and orchestration give it a fresh feel. The sweet music not only complement the words but create a heavenly sound. Unlike many of the tracks on the album, this song is a call to worship. It's simply beautiful. In addition, Martin Smith's vocals are at the top of his game on this song.

"Tear Drop" is a very sentimental and dear song as it seems to recall his traumatic car accident that occurred years ago. Alongside of that, the vocals are simultaneously haunting and comforting as it reminds of the closeness of the Holy Spirit. For those seeking a more classic feel will find solace in "Jesus of Nazareth." For 95% of the song, it flows well and the music is extremely captivating. That last 5% is an explosive jam session. Some may lose interest with it; others may find it utterly enjoyable.

A good portion of the songs have very God-focused lyrics, but don't really lend themselves to the conventional service. However, observing them as they are, it's an enjoyable album with trendy music. Here's the bottom line: those who want Delirious 2.0 may be slightly disappointed, but those who are interested in something a little quirky and different may find it here. Regardless, let us celebrate the return of Martin Smith. He's still got a song to sing. - Ryan Barbee, 4/21/13