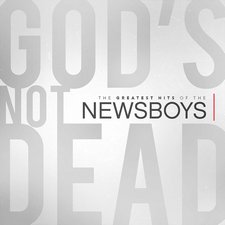 Newsboys
God's Not Dead - The Greatest Hits of the Newsboys


Newsboys have been around for as long as I can remember and have been a staple of worship and contemporary pop tunes. So if you've been a fan of theirs, you can see how multiple "best of" albums can be released and that's exactly what God's Not Dead - The Greatest Hits Of The Newsboys is. Generally, these types of albums are either nice fillers for fair weather fans or a must-have for hardcore fans to complete their discography. Let's dive into the tunes to see what Inpop Records, delivers this time.

The first set of tracks is exactly what I was expecting. "God's Not Dead" and "Born Again," from the group's more recent albums of 2010 and 2011, start off this twelve-track ensemble, and they are solid choices as some of the more popular songs in recent history for the Newsboys. Both songs serve as anthems for listeners and have a great eternal focus. Throughout the listen there will be a handful of tracks falling into that same "this is what I expected from a Newsboys greatest hits album" category, such as "Your Love Never Fails" and "The King Is Coming." You will also hear Michael Tait singing on some of the amazing worshipful tracks like "Mighty To Save" and "Revelation Song," but what sticks out to me is the handful of Peter Furler-fronted songs included in this album. Some fan favorites included would be "I Am Free" and "In Wonder" from 2006's Go album and "In The Hands Of God" from 2009's album of the same name. All are decent choices from Furler's latter years with the band, and will be enjoyed by current fans. Fans will also notice that all albums prior to Go are not represented, while other recent albums--like 2013's Restart and next month's Love Riot--are also absent because this compilation only includes selections from albums released by Inpop Records.

While I can appreciate both a Tait-fronted and a Furler-fronted Newsboys, I'm just not sure how I feel with their tracks being mixed together on the same album here. They both are excellent vocalists, but the band is fairly different when playing with each particular lead singer. All that being said, it is an interesting - albeit short - trip back down memory lane, with many worshipful songs glorifying our Savior. It's perfect for those looking to check out Newsboys for the first time or those completing their extensive collection. The question for listeners lies in whether or not you can appreciate the different styles and vocals mixed throughout this album.