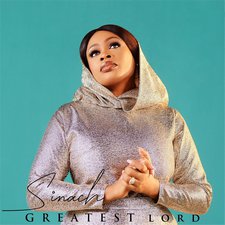 
Sinach is a Nigerian worship leader/songwriter based out of Africa. She has quickly become one of the most renowned worship artists around the world, and her work has been globally distributed by Integrity Music for quite some time now. In fact, she is the songwriter behind the hit single "Waymaker," which has been covered by more than 60 bands and musicians. Sinach is now releasing her tenth record, titled Greatest Lord, one that portrays her reverence for God in each and every song.

Things kick off with the title track, a song that showcases Sinach's impressive vocal range, as she passionately sings about God's greatness - a theme that is prevalent throughout the entirety of the endeavor. "We Prevail" is an excellent worship track, as she references Psalm 27, "My salvation, You defend me / Your massive arms protect me / Your word is my shield." Another standout is the slower, reflective "King Of Glory," as it features Darlene Zschech, which is an important component to the song's success.

As the record moves into the second half, some of the numbers do start to run into each other. However, Sinach's beautiful voice, along with the additions of multiple artists, helps keep each song engaging in their own regard. "Peace In The Storm" is beautifully written, as Sinach sings, "You are my shepherd and my guide / My peace in the storm / You are the fourth man in the fire / oh, I will not be afraid." The upbeat tune, "I Bless," shakes things up towards the end, before the joyful "There's An Overflow" closes things out.

What many will find refreshing is the fact that Sinach lets organic instruments take center stage, giving the music more of an authentic feel. In an industry that is oversaturated with synth-led and programmed musical backdrops, it is lovely to hear a classical approach in Greatest Lord. Most of the songs on the album feature African-style choirs in the background, which is also an element that sets Sinach's work apart from other artists. At the end of the day, this album comes highly recommended, as it will certainly diversify your catalog of worship music.