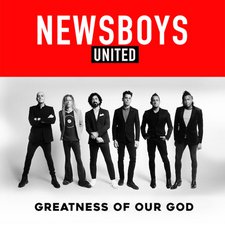 Newsboys
Greatness of Our God - Single


The unexpected reunion of former Newsboys lead singer Peter Furler and bassist Phil Joel on tour with the now Michael Tait fronted band, came as quite a shock to many. After joining forces, they are now unofficially called Newsboys United ("unofficially," because the band is still listed as just "Newsboys" for this single), and have extended original modest bookings by headlining the wildly popular Winter Jam tour. With audiences and listeners enthusiastically responding to the United version of the band, the announcement of new music is perhaps less surprising. Now, having arrived, what exactly did we get from new single Greatness of Our God, and is it any good? Well, it all depends on what style of Newsboys you were expecting.

Musically, it sounds like something from the Thrive / Adoration / Devotion era, with touches of Taits pop style mixed in. If this was a favored sonic direction for you, then you will likely dig the song. However, if hoping for witty lyricism and quirky pop/rock melodies, youll be forced to wait for further music from the lads. This isnt a bad thing, just worth noting to temper expectations. Think of the worshipful tunes from their Thrive album, like It Is You, and more specifically, He Reigns, and youll get a good idea of the song's approach. In fact, if you listen closely, you hear an uncanny similarity to He Reigns. That seeming retread musically, and less than imaginative lyrics, leave this reviewer slightly underwhelmed, but not completely disappointed. Having said that, this is a catchy song, sure to hit big on radio. If the upcoming album can include some Steve Taylor co-penned songs, and mix them with a few like Greatness of Our God, then we may have a successful New era of The Newsboys moving forward.