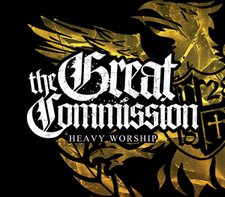 In 2009, The Great Commission released their debut album, And Every Knee Shall Bow through Strike First Records. Now they've signed to Ain't No Grave Records, along with Sleeping Giant and As Hell Retreats, to release their sophomore album, Heavy Worship. This album takes a step up from the debut.

The first major difference you notice as "Don't Go To Church, Be The Church" plays is the clean vocals that sound strikingly similar to those of A Day To Remember. This helps to distinguish one song from another, whereas the songs on their debut sounded very similar. The guitars are mostly crunchy, chugga-chugga style with several good riffs sprinkled in. The drums are not as good as they could've been, due to the repetitive beats and a little lack of creativity. The screams, or growls remind me a little of Matthew Hasting of MyChildren MyBride, especially in "The Juggernaut" and "Reap What You Sow."

The lyrics are convicting and as hard hitting as the music. The song "Preaching To The Choir" talks about people who fake Christianity at church ("Some say Christians don't tell lies, they just sing them on Sunday morning"). "Weight Of The World" simply acknowledges that, "I know You are always with me, even to the end of the age." And the song "The Walking Dead" desperately asks the question "Will you stand with this generation or will you watch it dig its own grave?"

All in all, this album is a huge improvement upon their debut two years ago. The only complaint I have is that the guitars are a little generic and could have been a little more technical. Those of you who loved And Every Knee Shall Bow might not like the emo choruses here, but if you like some good spirit-filled hardcore, support the band's mission and pick this one up.