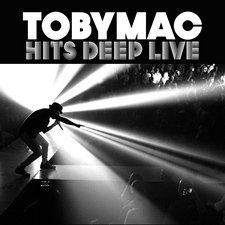 
Eight years ago, TobyMac proved with Alive and Transported that his live recorded music was Grammy Award-worthy, winning best Rock Gospel Album--a category normally dominated by studio albums. After proving his energetic and engaging live performance could be captured in the format of a live album, it makes sense to follow up with another one eight years later.

While Alive and Transported had the unique attribute of being the first live album from TobyMac as a solo artist, Hits Deep Live is a different animal. Alive and Transported came after his studio album Portable Sounds (which marked the beginning of his shift away from rap/rock), so its selection of songs from Welcome To Diverse City and Momentum gave it a good dose of hip-hop and rap/rock. The 16 tracks on Hits Deep Live draws from his latest four albums: This Is Not A Test (9 songs), Eye On It (4 songs), Tonight (2 songs), and Portable Sounds (1 song), which gives it a poppier vibe than its predecessor. The fact that this is such a strong tracklist without reaching back to his DC Talk days or his best solo album Welcome To Diverse City proves how solid Toby has been over the past decade. Of his latest releases, This Is Not A Test is the strongest, so it's nice to see the set list focusing on this album.

Toby and his team made all the right moves to ensure this album is worth the purchase. The overall sound quality and video quality is sharp and clean, something that has been improved compared to Alive and Transported, thanks to better technology even in these past eight years. "Til The Day I Die" gets things moving right away, whereas many live albums can take a minute or two to get going between audience cheering and extended intros. Most songs are played similarly to their studio recordings, but there are several tracks that offer a unique twist to make them distinguished from their original versions. The best examples of this include Colton Dixon playing piano and singing the chorus of "Undeniable," Diverse City members GabeReal and Dave "D Dubb" Wyatt using marching drums on "Eye On It," Hollyn's impressive background vocals on "Funky Jesus Music," and trading the electric guitars for acoustic guitar picking on the intimate "Steal My Show." A handful of tracks really shine in the live format. "Move (Keep Walking)" is a great example of a song that sounds even more exciting than the already fun original. The acoustic guitar riff on "Beyond Me" is less polished than it was on the studio version, and the whole song is a minute shorter, which works better for the song. And it's no surprise that "Feel It" would sound exceptionally fun live.

There are a few odd choices in the making of this project, mostly in the video portion. The camera changes basically every second on most songs, especially the more upbeat songs. It's not as quick-changing as Alive and Transported, but it can still be pretty dizzying. Other strange choices include Toby's glittery t-shirt that reads "Mac," and using the recordings of Kevin Max and Michael Tait for "Love Feels Like" with their faces appearing on large screens behind the band. The song explanations and banter between tracks can range anywhere from interesting (such as the explanations of "Beyond Me" and "Steal My Show") to slightly awkward (such as the intro to "Funky Jesus Music"). Thankfully, this talking is tacked on to the end of tracks, making it easy to skip over the banter.

While the Hits Deep Live CD/DVD doesn't seem as "necessary" as Alive and Transported, it certainly has more value than a greatest hits collection of the same songs. It does a great job capturing the energy in the room that night, avoiding the "you had to be there to enjoy it" quality that plagues many live albums. If you are a TobyMac fan or love listening to live albums, Hits Deep Live is well worth the purchase.