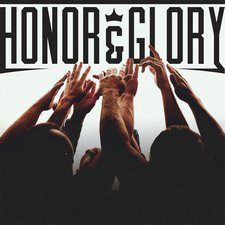 
Honor & Glory is a worship project hailing from members of Disciple, one of Christian rock's most popular names. It seemed like only a matter of time before the band delved into the scene, especially since Disciple has always incorporated worshipful elements into their music over their lengthy career. Songs such as "Best Thing Ever" and "God Is With Us" from previous records echo that sentiment. With their self-titled debut, Honor & Glory is exactly what you would expect: guitar-driven, uplifting tunes that point to God's majesty from start to finish.

"Victory" kicks things off, and sets the tone for the record as a bold proclamation of Christ's power over all. The original "Fear Of Missing Out" follows suit, as lead vocalist Kevin Young passionately sings "I don't want to miss out on Your glory / Your anointing, Your power on display / I don't want to miss out on Your goodness / Your kindness, Your mercy covering me." "You are God (When The World Is On Fire)" and "God Of My Story" are also penned by the band, with both focusing on the aspect of God's sovereign hand over in our lives; "You're the author of eternity / You are resurrecting all of me." A rocking version of Phil Wickham's "Battle Belongs" caps off the first half, serving as a solid cover to feature on the record.

Those unfamiliar with Disciple may be a bit surprised with "Come Alive," which embraces a heavier vibe that would be found on their main endeavors. It's an excellent change of pace, seamlessly meshing chunky guitar riffs with energetic worship. Fans of the band will thoroughly enjoy "Glory Of God," as the chorus is actually taken from the bridge of Disciple's hit song, "Radical." Towards the back end of the offering, "Greater" and "Won't Start Now" slow the pace down, setting up for the finale in "Jesus We Love You." The stripped-down number fittingly ends with a long and soulful guitar solo from Josiah Prince and Andrew Stanton, showcasing the duo's musical creativity.

Generally speaking, Honor & Glory is an impressive project that portrays the group's worship-centered side in an effective manner. It makes sense for Disciple to create a new name for this new chapter, keeping it separate from what people know them for best, while allowing the group to pursue worship under a new banner. Without a doubt, the band's passion for Christ is clearly evident in everything they produce, and that is no different here. Kevin Young said this about Honor & Glory's goal: "I'm not going into writing these songs saying 'how can I make this song great?' - instead, I'm saying 'how do I use this song to share how great God is?'" For fans of the band, or those looking for a worship record with a unique identity, Honor & Glory comes highly recommended.

Honor & Glory, a side project from members of hard rock band Disciple, combines worshipful lyrics with an energetic pop rock sound that is more accessible than their normal post-hardcore sound. Still, vocalist Kevin Young's singing is as passionate as ever, while the rest of the band proves that worship music can rock, and doesn't have to be a subdued cliché. Highpoints of this self-titled album include "You are God (When the World is on Fire)," "God of My Story" and "Come Alive." "You are God" is a catchy song that wouldn't be out of place in a worship service, with the slowly building verses leading to the triumphant chorus. The lyrics are a timely reminder as Young sings, "You are God when the world is on fire / when it seems out of control. / You are God of infinite powerand the whole world is in your hands." This is especially impactful when you consider that some parts of the world are literally on fire right now. "God of My Story" is another solid worship anthem that's very singable and, like the previous track, reminds us of God's sovereignty as it references 2 Corinthians 3:18 and Psalm 139:5. "Come Alive," on the other hand, pays homage to Young and company's roots, with a heavier guitar hook and in-your-face drums. Despite having a slightly harder edge, this song isn't out of place with the softer ones, since it's also melodic and fun to sing. Even if Honor & Glory's self-titled debut doesn't revolutionize the worship genre, it's an enjoyable listen. On this album, Kevin Young and the band remind us that worshiping God can be sincere without being an eight-minute, trance-inducing crescendo. Worship should not be a sound, but an earnest desire to praise the One who saved us. - Review date: 3/18/22, Andie Hardee of Jesusfreakhideout.com