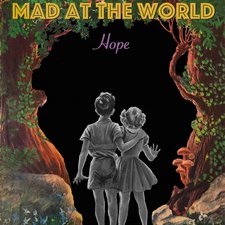 Mad At The World
Hope


About ten seconds of the opening strains of "Healing on Planet Earth" should be all it takes for most of those who hear it to draw the all-too-obvious conclusion: the new Mad at the World album (the band's first collection of all-new material since 1995's The Dreamland Café) sounds very little like anything currently playing on Top 40 radio. Music lovers who came of age at the turn of the new millennium will probably recognize a certain similarity to the synth-infused indie-leaning pop stylings of artists like Franz Ferdinand, Arcade Fire and Ladytron. Those old enough to remember the birth of MTV and the then-nascent channel's proclivity for playing British new wave and synth-pop acts like Simple Minds, Yazoo and Ultravox, on the other hand, will be quick to tag this latter trio of artists as a closer, and arguably more correct, point of reference.

While many bands who adopt this sort of '80s-inclined sound could rightly be dismissed as mere fad chasers or revivalists, it bears noting that brothers Roger and Randy Rose -- who constitute the heart of the Mad at the World collective -- come by their Me Decade aesthetic honestly, given that their debut release hit the shelves during the waning years of Ronald Reagan's second term in the Oval Office. For those who recall the age of skinny ties and cheaply-made music videos, this does lend the proceedings a certain historical significance and legitimacy. This being said, one doesn't have to have, say, the entire Depeche Mode back catalog committed to memory in order to enjoy the buoyant synth-laden grove of "My Old Best Friend," the terse, invigorating rhythms of "You Are Free" or the joyfully sweeping textures of "Moving and Moving Out," all of which do decided justice to the new wave and post-punk artists from whence the Rose brothers derived their greatest influence.

The fact that the lyrics are more narrative than worship-oriented might disqualify the band in the eyes of those for whom the acts they hear on the radio serve as the first and last word on that which should qualify as Christian pop music. A closer inspection of the record's wording, though, reveals the heart of a band intent on relaying the love, grace and forgiveness of their God within the context of the struggles and uncertainty inherent to the human condition rather than simply recycling the now-ubiquitous words and phrases that dominate so much of what is heard on Christian radio and during the average Sunday morning contemporary service.

Naysayers are sure to look cross-eyed at the new MATW outing, or any piece of work, for that matter, that would deign to act as if the last three decades never happened. Then again, it is arguably this sort of unapologetic audacity that winds up working as Hope's most potent asset. One's particular views on the music of the 1980s and any given artist's willingness to borrow from it aside, in the end analysis, this album, like any other, ultimately sinks or floats based on the underlying merit of its songs. To that end, with only one or two weaker moments to its credit (thanks to meandering slower numbers like "Can You Feel My Pain" and "Just Beyond the Clouds of Grey"), the long-in-coming Hope project acquits itself splendidly.

For their first studio album in over 20 years, rockers Mad at the World go back to their new wave roots for a sound that effectively straddles the line between retro and current. Unlike much of today's electronic music, Hope isn't bogged down by gimmicks and effects. Instead, the synths take a backseat to Roger Rose's soaring vocals, particularly on tracks like "You are Free" and "Can You Feel My Pain." - 12/31/17, Andrea Hardee of Jesusfreakhideout.com

MATW (Mad at the World), the brother duo, quickly became a notable band on Frontline Records which was much like the Tooth & Nail in its day. MATW was once a prominent force to be reckoned with in a Christian music canvas that was lacking of any techno alternative colors. MATW went through so many phases in its initial beginnings with the first 2 albums leaning toward Depeche Mode, New Order, and Tears for Fears. Their next albums were a mix of alternative rock and grunge. Much has changed since MATW last album, The Dreamland Café, but fortunately, they have chosen to return to their 80s techno form. This is a very wise choice because just like the hair styling's of Vanilla Ice and Zach Morris (Saved by the Bell), there has been a resurgence of the 80s sound, such as Paper Route and Paramore's After Laughter. MATW's Hope effectively reminds the fans why we enjoyed them so much when hearing songs "Never Gonna Stop" and "Break Me Down." It will take multiple listens to adjust to the sound if you've only been accustomed to their later releases in the 90s. After a huge 22-year absence, MATW is back and we can only Hope (no pun intended) that they will evolve with more projects with that sparkling techno flavor. This album could be a welcome addition to listeners who appreciate music with a 80s style. - 1/4/18, Wayne Myatt of Jesusfreakhideout.com