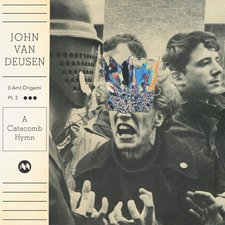 John Van Deusen
(I Am) Origami, Pt. 3: A Catacomb Hymn


If you dont know the name John Van Deusen, perhaps you remember the indie band The Lonely Forest that he fronted from 2005-2014. Based in Anacortes, Washington, lead singer and main songwriter, Van Deusen and company released two EPs, and four full-length indie/rock albums to modest critical acclaim. If this is your introduction to his work, welcome. Venturing out as a solo artist, he meticulously planned four albums titled I Am Origami, with part one releasing in 2017, and part two dropping the following year, in what was this reviewer's runaway favorite album of 2018. (Seriously, go check it out if you havent yet.) Its one of the best non-worship worship albums in recent years.

He returns in 2019, no longer an independent artist (Tooth & Nail Records), with part three titled, I Am Origami Pt. 3  A Catacomb Hymn. This one is a dose of heart-on-your-sleeve, melodic, indie pop/rock, paired with his trademark earnest lyrics. Unlike the more subdued and straightforward part two of the series, we get a bold, brash set of songs focused more on his personal struggles. With his thoughts centering on deeply relatable topics like social anxiety, fear, loneliness, depression, and suicide, Van Deusen describes the album as a note to listeners that its okay to not be okay.

Straight out of the gate, Whatever Makes You Mine is a song written about overcoming fear and loneliness, where he admits, I thought I could make it on my own/now Im choking on the seeds Ive sewn. Utilizing light screams to communicate his desperation to great effect, he pleads in the chorus, whatever makes you stay/whatever makes you smile/whatever makes you come and be with me a while all set to an insanely catchy indie/rock tune that ends with a throaty roar. Universal Will To Become has several lyrical gold nuggets, chief among them are the lines, I am prone to wield a knife/Puckish in the night/still I feel a pull towards rising daylight, as he realizes that he is a man of two selves. Another highlight and favorite song, Social Sucker, appears to be imploring a friend to not get caught up in the allure of appearances that social media can drag people into. The song is a total ear-worm with an in-your-face 90s indie/rock melody. Try as you might, this one will get stuck in your head for days on end.

Though there are many other noteworthy moments, the next to direct your attention to is the achingly tender All Is Nothing/Nothing Must End, which ponders snuffing out the candle you light within me as John yearns to be, undividedly yours. Theres a tremble in his voice that denotes a true sadness, a deeply felt struggle, as the song crescendos and falls, ending on a melancholy note. It is hands-down the best down tempo song, and it makes a case for top track of the album. Hot on its heels, the following track, Fly Away To Hell, offers the hopeful encouragement to himself, and listeners, dont forget the way the sun hits the lake and dances back and forth/or the way a sparrow flies/or the way the rabbit runs away/and stays another day. The song You Dont Know What Youre Asking deals with the overwhelming expectations that can be placed on us from well-meaning friends and family. A pop/punk musical background drives the song to his exasperating conclusion of I dont know. Closing track Numb leaves us with the open-ended sentiment that Dont worry/Im not hurting/Ive grown numb. The song (and album) leaves this reviewer highly anticipating part four of the I Am Origami quadrilogy, and its conclusion. (Stay tuned!)

Due to the somewhat heavy subject matter in some songs, it would be easy for this to be an album too dense for repeat listens, but Van Deusen shows the utmost care for his listeners in keeping the music light, to go with the deep struggles of his soul. This is a needed juxtaposition, and he pulls it off expertly. He never wallows in self-pity, but serves listeners by offering his underground praises (aka "Catacomb Hymn"), while not being afraid to go to places that others might shy away from lyrically. This is a fantastic release, and sure to be in the conversation for this reviewer's top ten of the year. John Van Deusen may not be a household name yet, but if he continues to release excellent albums, he very well could be in the near future. Dont miss this one!

The last couple of years have been busy for John Van Deusen. Since 2017, hes released two solo albums and one album with his band Buffet. His newest offering comes in the form of (I Am) Origami, Pt. 3 - A Catacomb Hymn, courtesy of Tooth & Nail and DevilDuck Records. Quite frankly, this might be the best T&N release in years, with an infectious, 90s-influenced indie rock sound and relatable lyrics that wrestle with a number of internal struggles. Whatever Makes You Mine is a fantastic opening track, with a little aggression in the chorus, and You Dont Know What Youre Asking is a seriously catchy track that will have you answering peoples questions with a hearty I dooooont knoooooow. Other highlights include Let Me Let You Use My Power, Social Sucker, and the quieter If All Is Nothing / Nothing Must End. Van Deusens third volume of the (I Am) Origami series sounds different from the other two, but it continues his trend of releasing terrific and thought-provoking tunes. Make sure you pick this one up right away. - Review date: 7/18/19, Scott Fryberger of Jesusfreakhideout.com