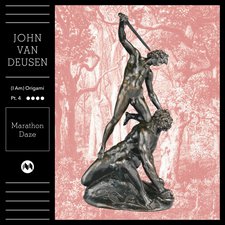 
John Van Deusen makes dangerous music. As in, to listen to his music is to risk being sucked into the gravitational pull of challenging, poetic, and moving art that quietly insists you lean in. It's an invitation that's dangerous because it would be easy to dismiss with our modern on-the-go style of consuming music. Easy to discount, unless you intentionally slow down and read between the lines. His four-part I Am Origami series ends here with the mammoth twenty-one-track Marathon Daze. Ultimately, it is an epic amalgam of the three offerings that preceded it. Mixing indie pop-rock with a punk ethic, his nakedly authentic lyrics, and emotive vocals, JVD covers the gamut of existential anxiety. Along the way, he pauses to take aim at topics such as his own fickle heart, the threats of industry and empire, fatherhood, addiction, and love.

Marathon Daze is littered with standout tracks, so the challenge for me was knowing which to highlight. First off, sounding like a resigned sigh and a weary plea, "Oh, Sweetest Name" is a nuanced treasure and terrific intro to the record. It's a song about examining your beliefs and feeling alienated from American Christian culture. No clearer is this communicated than the chorus which questions, perhaps rhetorically, "And oh, sweetest Name/Is this really who I am?/Do I need Your love like a gun needs a hand?/And oh, Love of life/Is this really where I stand?/Do I need Your love like an altar needs a lamb?" From there, "Uninspired; Blowing Smoke" also expresses dismay at the American Church's unholy alliance with power and politics. This is all set to a guitar-based jangle-pop melody. "All I Need" and "Give Me Back My Heart" address addiction's misplaced attempts to fill the "inconsolable longing for we know not what" described by C.S. Lewis. (Side note: This is further defined in the German word Sehnsucht, which is a very rewarding use of your time in research if it intrigues you.)

"In the Morning" is an uber-catchy exhortation for a person in pain to walk away from harming themselves stating, "Step away from the pain/You can wait for light in the morning." Featuring an organ and piano, they act as a joyous juxtaposition musically throughout the song. Defiant and resolute to be "weird" and "noisy," the song "Boring" aims criticism at the Christian music industry, calling out the lack of "risky makers" and abundance of "uninspired takers." (Of additional note, the artwork for the song's single release is one of my favorites in years and is worth a gaze. You might recognize a certain band logo or two, but I won't spoil it for you.) Another upbeat tune worth mentioning is an ode to his wife, called "Patient Saint." Here, Van Deusen honors the unconditional love his wife has doled out throughout their relationship. Particularly heartbreaking are the lines, "My God/How I took you for granted/And you still harvest pain that I planted /And with the patience of a saint, you wait."

The mid-tempo and ballads reign supreme on Marathon Daze, with the title track taking a slow burn route, espousing quiet places and outdoor spaces. "Be Not Far From Here" is a simple way to say "I'm empty without you," and "Help Me Let Go" is an earnest song of surrender to the arms of an everlasting God. As the album hits the final stretch of songs, it finishes incredibly strong with "Universal Will to Become Pt. II," "Oslo," "God Outside of Time," and "If I Get to Heaven." It should be noted that "Universal Will to Become Pt. II" will be the final track of the album on streaming services, whereas the deluxe album includes an additional six tracks only available on Bandcamp. These concluding numbers encompass a tender-hearted legacy, with exhortation to follow God's whisper, sobering thoughts on privilege, and worshipful surrender. This full version ends where Pt. 2 of the series began, with an instrumental coda of "All Shall Be Well." In its full form, Van Deusen's Marathon Daze is much like journey of life itself: long, with ups and downs, but all in all, a satisfying ride.

It has been said that the job of the artist is to look out upon the world and describe what they see, and John has gifted the listening world with a full palate of colors, rife with provocative yet pastoral observations. Song-after-song is filled with longing: prayerful poems with the occasional puckish statement directed at both himself and the Church. This is all communicated in love and should cause much-needed reflection on all accounts. Marathon Daze is an album I simply cannot recommend enough. It's the kind of "middle space" record I find myself drawn to-perhaps too spiritual for secular audiences and too spiritually vague for Christian audiences. However, the sweet spot within tension makes for excellent art, and this tension-birthed album has easily raced to my number one album of 2022. I challenge you to give the songs intentional time and space to worm their way into your heart. I think you'll be glad that you did.

Editors Note: There are multiple instances of words used in a manner that could be considered profane, including "hell" in the chorus of "Boring," "bastardized" on "Universal Will to Become Pt. II," and "damned" on "Oslo."

In the entertainment industry, there are few things more satisfying than when a series is given a proper and well-written conclusion. And that's exactly what we get with Marathon Daze, the fourth installment of John Van Deusen's (I Am) Origami series. The first three parts all explore different genres and styles and contain varying glimpses into Van Deusen's faith walk. Marathon Daze is doubtful and desperate, but it's also hopeful and worshipful - and maybe a little tongue-in-cheek. It's also some of his absolute best work, with a whole host of songs that I will be eagerly returning to throughout the year and beyond. The album opens with a pair of early highlights: the prayerful "Oh, Sweetest Name" and the alt rocker "Uninspired; Blowing Smoke," the latter of which reminds me of the best of A Catacomb Hymn. Later in the album, the set of songs from "Any Less Than My Best" through "Heart Lake" is a tremendous run, with "In the Morning" and the Every Power Wide Awake-esque "Be Not Far From Here" serving as my favorite tracks of the whole album. The record is truly great from start to finish, and it further cements Van Deusen as one of my favorite newer artists. Marathon Daze hits on every level, and I'll almost certainly be saving it a seat in my top ten at the end of the year. - Review date: 6/1/22, Scott Fryberger of Jesusfreakhideout.com