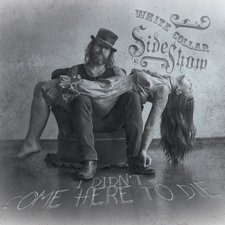 
There isnt anything like White Collar Sideshow except White Collar Sideshow. An industrial/shock rock outfit with an insane, over-the-top, theatrical live show, the duo of TD and Veronica Benton spend years not only writing songs for each album, but designing an immersive and engaging live experience as well, which means the time between albums is far longer than a typical album cycle (for instance, we last heard from the Bentons with 2012s The WitcHunt). Finally, and with the backing of a major label for the first time in their 12-year history, White Collar Sideshow is returning with their newest project, I Didnt Come Here To Die.

With the live show playing such a huge part in the act, merely listening to the first two albums will make you feel like youre missing something. I was able to witness the show for their debut EP, but I didnt get to catch The WitcHunt live, so it never really grew on me. However, while I am eager to see the new stage show if/when I get the chance (which will be accompanied by an original film written and directed by TD), I Didnt Come Here To Die still works surprisingly well as a stand-alone album. There arent any instrumental tracks or interludes - just eleven solid tracks that sound great from start to finish.

As mentioned above, the name of WCS's genre game for the past decade has been industrial rock and shock rock. But the Bentons have taken a different approach this time; I Didnt Come Here To Die keeps some of the previous sound (found in tracks like American Psycho, Pig in the Middle, and Like Spiders Weave), but mostly replaces it with a fantastic mix of hard rock and southern rock. Things get quite heavy on occasion as well, as TD showcases his fantastic scream in multiple tracks, while the fierce electric guitar and pounding drums amp things up. One of my favorite tracks is Bring Out Your Dead, which features all of the best elements of WCS; it begins with a twangy guitar and a child creepily repeating the songs title, then transitions to a delicious electronic/nu metal groove (a la Rob Zombie) with crunchy guitars and TD speaking and screaming, Im melting, melting and dont care who knows it / full throttle role model zombie metaphoric / consuming the flesh from the heart to the stomach / Im melting, Im melting and dont care who knows it / eye for an eye makes the whole world go blind. Pig in the Middle is another hard-rocking highlight, which hearkens to the bands overall theme of killing the pig (a reference to our flesh, which shouldnt go over any Christian listeners head). Im also fond of the closing track, Fist Full of Grace, which may be the albums best example of blending hard rock and southern rock. Once the song gets going, with its simple-but-thick drum beat and its combination of electric guitar and banjo, its just pure excellence.

Id be remiss if I didnt take a moment to give some shine to Veronica, who provides vocals on just about every track. In the bands previous performances, Veronica has played the role of the Faceless Woman, a representation of the value TD placed on women as a former pornography addict; as such, we didnt really hear from her outside of the bass guitar. But she has a voice in this story, and its a real treat to hear her provide her vocals in different extents throughout this album. Whether its as a background vocalist in My Warped Places or I Didnt Come Here To Die or leading the intentionally creepy Hug Me or Hang Me, her new part is a very welcome addition.

Oh, and kudos to the band for making a cover of The Doors somehow work both stylistically and as a part of the albums story. Ive never liked Break On Through (To the Other Side) outside of this album.

Im thrilled to be able to say that White Collar Sideshow is back. Musically, they've never really been something for everyone, and thats probably still true, but I Didnt Come Here To Die is actually a bit more accessible (about as accessible as possible while being a mixture of Rob Zombie and a less metal, more southern Maylene and the Sons of Disaster). If you get a chance to see them live, take it. But even if you dont, youll want to give this album a shot, because its their best work to date.