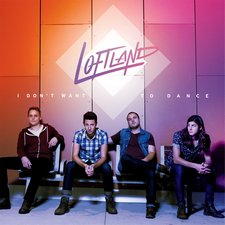 Loftland
I Don't Want To Dance

Dream Records seems to be on a dance rock kick. After signing Press Play, Satellites & Sirens, Steve Hare, and Jonathan Thulin, Loftland is the most recent addition to the lineup. I Don't Want to Dance, even just by its contrary-leaning title, seems to hint at an edgy approach to the dance rock genre, but upon a closer look, Loftland's demeanor looks far less threatening.

Describing Loftland's "dance rock" approach is a bit tricky because most bands with that self-given description don't sound like Loftland at all. Former Tooth & Nail band Queens Club was chaotic and sometimes incomprehensible, but they always had a unified concept to go on. Jonezetta opted more on the rock side of matters, and labelmates Satellites & Sirens are more anthemic and credible. This leaves a band like Loftland in a difficult position; the guitars aren't dirty enough to call Loftland a "rock" band, but the electronic influence isn't strong enough to truly certify the band in that often high-brow category. For the lack of a better term, Loftland's fun-loving approach proves to be just a bit too "lofty" to fit anywhere comfortably.

Loftland, therefore, is another pop band. This isn't necessarily a bad thing, but if the band's goal was to shoot for something more complex and thoughtful than that, the quartet has gravely missed the mark. If Dominic Gibbs' vocals were replaced with Katy Perry or Adam Levine's, it wouldn't necessarily be too ill-fated of a match, though it's a bit difficult to envision either of them singing any of the wholesome lyrics on display here. In the same vein of typical top-40 pop music, however, the tracks here are more likely to result in irritating earworms rather than fun songs for listeners to relive. The "la la's" of "Lie to Me" stop being effective midway through the song, and the opening synth notes of the opener, "Today Is a New Day," don't inspire much confidence for the rest of the record. Pop music is supposed to be addictingly enjoyable, and while there are a few spots where Loftland nails that feel (such as the bass line on "Lovesick"), it's always the exception and never the rule.

In addition, Loftland isn't objectionable by most moral compasses, which does differentiate them further from most radio pop. Still, though, the odd club-hopping mentality of tracks like "Can't Get Enough" and the title track doesn't mix well with the squeaky clean approach of "Girl Like That," a song that proceeds to describe all the attributes the singer wants in a potential mate ("I'm looking for somebody that's got my back/I'm looking for that girl that's faithful, fierce, and free/I'm looking for a girl like that/I'm looking for somebody that's my better half"). The list rings hollow, however, giving expectations that are neither compelling nor specific. It all comes across as generic and vaguely "Christian-y" in one large rut that leaves nothing rich for the listener to dig into.

I Don't Want to Dance, at the end of the day, lacks anything that would enhance an otherwise standard pop record. The sound isn't terribly creative, the lyrics don't take any meaningful risks, and few of the takeaways that exist are really all that valuable. Dream Records signed Loftland and released all of their independent work as this album, so perhaps more experience as a signed band will result in some better polished material for album number two. Until then, I Don't Want to Dance is more descriptive of the listener than the album.