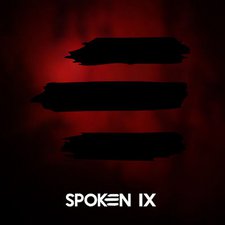 
With two decades of music behind them, Spoken has proven themselves to be a prime example of a band continually striving to better themselves and evolve with each subsequent release. Their displayed dedication is a good reason their previous two releases were such knockouts. Illusion and Breathe Again both exhibited the best of their melodic alt-metal sound, but IX finds them at an artistic standstill.

With only ten tracks, IX is a much shorter release than what we've gotten in the past and this both aids and hinders the album as a whole. While it's musically tight and focused, the project feels like it ends too soon. There's also a noticeable lack of lyrical depth here, and when this is paired with the album's short runtime, I can't say IX is one of the band's stronger efforts. Even so, the album has a fair number of highlights. Opener "This Is Not The End" is a steadily building rock tune about perseverance and hope. "Stronger" is one of Spoken's best tunes this side of Illusion. Fans of the band's harder edge will love "I Will Not Fade" and "Silence." These provide a generous dose of Matt Baird's signature screams and the bridge of the latter is arguably the best moment on the album. "Pages of the Past" makes excellent use of an industrial groove fans of Jason Wisdom's Death Therapy will undoubtedly appreciate.

There is no shortage of softer tracks here and, unfortunately, these encompass some of the record's weakest cuts. "Remember the Memories" suffers from some cliche lyrics about leaving behind an inspiring legacy. It's musically solid, but its subject matter has been done better elsewhere. "Sleepless Nights" and "In My Sight" try for a slow burn approach, but they end up being forgettable closers in the long run.

There's a lot to like about Spoken's latest release. It offers some of their heaviest work and Matt Baird's vocals are always staggeringly good. However, IX sounds like a collection of b-sides from Breathe Again. They're solid enough to tide over fans until the next full-length, but they lack the substance that keeps them coming back. If you haven't heard any of Spoken's material, Illusion or Breathe Again are much better places to start. For everyone else, IX comes with a light recommendation.

Spoken has been around a long time and is one of the most consistent bands when it comes to pumping out good rock music. IX is their newest release, and will be enjoyed by many fans despite potentially being their weakest album from the past decade or so. Tracks like "This Is Not The End," "Dying Without You," and "Silence" are your typical Spoken hard rock tracks that carry Matt's signature vocals and positive themes of perseverance and finding hope in true acceptance. Each song is an example of why Spoken has earned such a solid fan base and will be enjoyed by all listeners. IX does tend to lean to the heavier side of Spoken, which I really enjoyed. "I Will Not Fade" and "Pages Of The Past" showcase screaming vocals, heavy riffs, and great drumming making for solid hard rock tunes. Unfortunately, the album barely hits the half-hour mark, and the softer/ballad attempts fall short of Spoken's best. That being said, it still fits into the band's discography well. There is nothing too creative here, but Spoken fans will enjoy IX even though it's not as good as what we all know the band is capable of creating. - Review date: 9/8/17, written by Kevin Hoskins