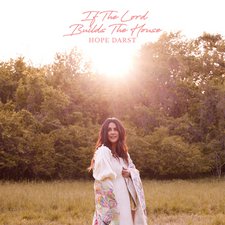 Hope Darst
If The Lord Builds The House - EP


Hope Darst, most famous for her recent singles "Peace Be Still" and "Promise Keeper," is back with If the Lord Builds the House. While her previous singles did not particularly stand out to me, I was compelled to give her another shot.

The EP begins fairly strong with the title track, a Joshua 24:15-inspired song that is elevated by Darst's soulful singing. I would not be surprised to hear this song on the radio soon. However, Darst's vocals are unable to save "Breakthrough Coming" from mediocrity. The cloying, generic lyrics about speaking God's name have good intentions, but fans looking for more depth will be sorely disappointed. "Never Walk Alone" is pretty standard CCM fluff, but the lyrics are undeniably encouraging.

"Give You the Glory" is also pretty standard, but David Leonard's guest vocals help make the track stand out more. Unfortunately, the song is dragged out for about two minutes too long. The opening beats of "Honey" remind me heavily of the worship music of the late '90s/early 2000s. This is not a complaint; in fact, I rather miss that age of worship music when it was fresh and not nearly as generic as it is now. "Coming Back" starts off strong, but its repetitive bridge drags the song down.

The EP ends with another version of the opening track featuring Jon Reddick. As much as I do not particularly like the trend of re-releasing songs with collaborations, Jon Reddick actually brings a lot to the song. However, I do not see any good reason for both songs needing to be included here.

At the end of the day, Hope Darst has released a mixed bag of songs with If the Lord Builds the House. Some are decent (i.e., the title track and "Honey"), some are frustrating (i.e., "Breakthrough Coming"), but none of it is groundbreaking in any regard. This is truly a shame because Hope Darst seems truly genuine in her faith and music. However, some better lyrics and stronger instrumentation would definitely help the EP stand out.