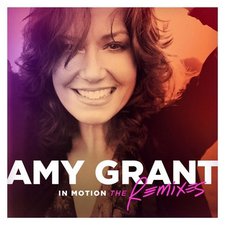 Amy Grant
In Motion: The Remixes

It is difficult to overestimate the impact and influence of Amy Grant on Christian music. Her storied career is noteworthy not only for its tangible measures of success, such as scores of awards, mainstream chart-topping singles, and the first CCM album ever to go platinum, but also for sometimes creating the mold, breaking the mold, and then creating a new one. The 54-year-old got her start in the business at just 15, and albums like Age to Age, Unguarded, and Heart in Motion can all rightly be called groundbreaking, and all for different reasons. One song in particular was commercially monumental in the early nineties. "Baby Baby" topped the Hot 100, supported a multiplatinum album that topped the Christian chart for over 7 months, and was nominated for the most cherished Grammy awards: record and song of the year. When CCM Magazine published their "100 Greatest Albums in Christian Music", Grant's Lead Me On topped the list, ahead of albums by Rich Mullins, Larry Norman, Mark Heard, and even U2.

Through the decades, Grant has changed significantly in terms of musical style, presentation, image, and lyrics. She's been adept at matching trends in both Christian and mainstream music, and the fact that few blink an eye these days when an artist crosses over from CCM to mainstream is due in large part to Grant's navigation of those once-tumultuous waters. She's also stayed relevant, with last year's How Mercy Looks from Here nearing top ten status on the Billboard 200.

It is perhaps this extraordinary record and this proven ability to stay, if not ahead of the curve, at least on the curve, that makes Grant's latest release - In Motion: The Remixes - such a colossal head-scratcher. Remix albums caught on in Christian music several years ago and reached such a level of proliferation that they sometimes seemed like blatant attempts by labels to extend the shelf life of as many albums as they could. There would be the release, the "Special Edition" release, and then the remix release, all of the same album. When remixes are done well, they reimagine songs in ways that might get a listener thinking about lyrics in a new way, or they inject a beat that breathes new life into a familiar melody. When they're done poorly, they become annoying distractions from superior source material.

In Motion is not a crass commercial money grab, as it gathers songs from throughout Grant's career and pairs them with some prominent DJs and engineers. However, it misses the mark in a number of ways. The mixes lack variety, and though a broad roster of remixers is featured (Dave Audé, Tony Moran, Guy Scheiman and more), the beats sound way too similar from track to track. More profound is this question: who is the audience? Is this an effort to make Grant's older material more accessible to younger fans? Is it meant to give her older fans a workout soundtrack? Or - and this might be the biggest stretch - is this an attempt to introduce dance clubbers to the music of a CCM legend? In any case, it falls short. Grant's pop songs ("Baby Baby", "Every Heartbeat") work okay, and the former has in fact already charted on Bilboard's Hot Dance Club chart, but the remixes add little.

Innovative musical moments are lacking, and the album sounds pretty much like you'd expect: familiar vocals set to up-tempo dance music. It seems too bland to attract new listeners, and longtime fans will probably seek out the music only for curiosity's sake. Almost half of the nine primary songs are from Heart in Motion, so this is not to be considered a sort-of greatest hits compilation.

In the album's worst moments, the lyrics and the music become a complete mismatch. There are two (yes, two) remixes of "Stay for Awhile," a sweet song about catching up with an old friend better suited for a lazy summer day than a club. "Say Once More" somehow strips the earnestness from Grant's vocal. And "Better than a Hallelujah" might be a leader among "songs most ill-suited for a remix," but there it is, track five.

If the album succeeds, it's in making listeners want to revisit the far superior originals. If that's the point, then so be it. Grant's catalogue features a host of noteworthy songs. All told, In Motion is a misstep, but an artist of Grant's stature is certainly allowed her fair share of missteps.