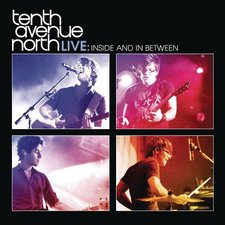 Tenth Avenue North
Inside & In Between

Since bursting onto the Christian music scene in a big way with their 2008 album, Over and Underneath, Tenth Avenue North has won two Dove Awards, issued their sophomore project, The Light Meets the Dark, and have toured extensively with artists such as Third Day, MercyMe and others. Now comes the band's third release on the Sony/Reunion Label, a live EP entitled Inside and In Between. The music was recorded in Charleston, SC during a recent tour and includes three songs each from their two previous albums, along with video footage of the band.

The challenge with an EP, which seems to be a trend in the industry these days, is that there isn't enough music to satisfy the typical appetite. The EP format feels like half an album in most cases (with some exceptions such as Mae's (m)orning, (a)fternoon and (e)vening releases, which consume as much recording time as a typical full-length release), which leaves the listener feeling a bit cheated. The format also doesn't leave much room for error, because while two weak songs on a ten-track release can be overcome by eight strong tracks, two weak songs on a six-track release stick out like a sore thumb. Fortunately, none of the songs on Inside and In Between are weak, although some of the band's (arguably) stronger songs from their previous two albums are absent from this recording.

Generally, the band's songs transition nicely from studio to stage, which is not always easy for bands. As one would expect, the live sound is not as good as a studio release, and there are a couple of moments when lead singer Mike Donehey's vocals sound a bit taxed, although his voice is generally compelling and clear. Donehey takes the opportunity in between songs to explain the meaning behind some of the lyrics, providing the listener with a clear sense of Tenth Avenue North's focus on grace and redemption. Unlike many "Christian" bands today, one doesn't have to guess about this band's faith.

With their next album due out in 2012, and an extensive touring schedule continuing over the next few months, Tenth Avenue North is working hard to maintain the momentum they've gained over the past couple of years. The maturity of their music is evident and fans would be well served not only to take a listen to this latest release, but also to check them out on tour. This is a strong group with a strong, clear message in a sea of Christian music that isn't always clear in its intent. These guys are one of the hotter bands in the industry right now, and they are certainly worth a long listen, although the band's previous two records are a better buy for the newcomer because they more fully showcase this talented group.